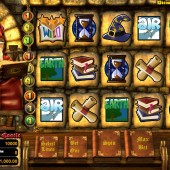 Here’s an interesting one from leading slots developer Betsoft Gaming, Wizards Castle: a 5 reel, 9 pay-line online slot that recreates the world of the medieval wizard or alchemist.

Magic? Have I Seen This Before?

That may not seem so original – after all, magic-themed slots like NetEnt’s creative Magic Portals or Pixies of the Forest, IGT’s fantasy-themed slot, are ten-a-penny – but the way in which the reels certainly is.

The wizard floats up and down at the side of the reels, and when you hit the ‘Spin’ button (here imprinted on a spellbook) he casts his wands over the reels to make them spin.

The symbols are all printed on stone tablets and each one spins independently, coming to a rest to form combos across 9 reels.

On those reels we get symbols including the wizard’s hat, a mortar and pestle, scrolls, an egg timer, spellbooks, plus the elements: fire, water, air and earth.

Choose a Scroll to Pick Your Prize in the Elements Bonus

The bonus round is triggered by hitting the four elements – earth, air, fire and water – in a winning pay-line. I found this pretty easy to trigger as there are plenty of these element symbols on the reels.

Once you trigger the round you’ll be taken to a second screen where you get to choose from six scrolls. Pick a scroll and win a cash prize.

There’s certainly some originality in Wizards Castle. The way the reels spin is something I haven’t seen before, but more paylines would have been nice, particularly when you consider how the bonus round has to be triggered.

I can see this game doing quite well on tablets and smartphones as it’s fairly basic but attractive to look at. For now, make the most out of a pretty sexy online version.