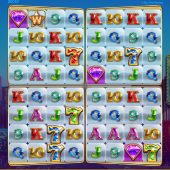 Slot Vegas Megaquads slot by Big Time Gaming is a game which plays with numbers even more than their revolutionary Star Clusters slot. It's a blend of Kingmaker Megaways with its multiplier mechanic, and Donuts slot with it's unusually small grid, well for a BTG game anyway. We have the frantic banjo player here, straight from Bonanza slot although he plays in a different key now and goes through a few different tunes, including 'She'll be coming down the mountain' if you like that kind of thing. The background is a depiction of downtown Vegas and we have the traditional BTG symbols on offer too. So will our bankroll be coming down the mountain too or can the game have a quadrupling effect for us?

OK, this is where the number fun starts on Slot Vegas Megaquads slot! We have 4 slots of 4 reels and 4 rows, each having 256-ways like the aforementioned Donuts slot. Symbols can be stacked or single, with stacked Wilds on each grid on reels 2,3 and 4 and Rainbow Single Wilds on reels 2 and 3 on each. Now I can't go the symbol pays yet because it's possible to get 8-of-a-kinds too. How? Well if either both the top or bottom 2 slots show a Rainbow Wild in both grids, they join for that spin to become an 8x4 or 65,536-way feature so you can get 5 - 8OAK wins! This is quite likely, as when it triggers the game randomly places a Wild on reels 4 and 5, whether they already have one or not.

Every time you get a 4OAK of the highest 4 symbols on any grid, irrespective of the amount of ways in that win, the symbol's respective coloured multiplier will rise by 1x, displayed on the left of the game. This multiplier will apply thereafter to any win of either 3 or 4OAK involving that symbol. This is where the similarity to Kingmaker Megaways slot comes into the equation. Now I did mention earlier the Rainbow Wilds feature can give 5 to 8OAK wins. If this occurs on any of the top 4 symbols, the multiplier will instead rise 2x for that symbol for 5OAK, 3x for 6, 4x for 7 and finally 5x for 8OAK!

Now some more maths! You need 4 scatters in the form of Gold VIP Tokens anywhere in view on the grids. You get 6 spins, plus 3 for each scatter above 4. You can retrigger them in the same way. Now you collect your total multiplier for the round by adding the accumulated purple, red, blue and green symbol multipliers on the left. This can be 15x, 28x, over 60x for example and apply to all wins, plus any 4OAK premium wins will add 1x as in the base game! Your ways now change again as you play 2 slots of 4 reels and 8 rows, or 4096-ways each. You could trigger the Rainbow Wilds feature too, which if you did would join both these left and right 4096-way slots to make a mega 8x8 slot for that spin with, wait for it, 16,777,216-ways!

Slot Vegas Megaquads slot has RTP of 96.59%. That's the easy part of the conclusion done. Your base game is pretty dire until you build those Wilds up, bizarrely not wanting to trigger the free games as if you have say a 10x multiplier for each premium symbol stacked up, then it performs very well with many wins in the 8-20x range. You will notice that mysteriously the Rainbow Wilds feature tends to disappear once you have built up decent multipliers for each premium symbol too. So the free games - these are very volatile and you often get a huge say 40x multiplier to take into them and will only see one or two wins, usually of 4OAK card values or maybe a single way of one of the 7's. Kingmaker Megaways all over again. It's pretty obvious that the monster wins this very volatile game is capable of will arrive only if you are lucky enough to trigger the Rainbow Wilds in the bonus. Good luck with that, but if you do, you really will be singing 'Viva Las Vegas'...