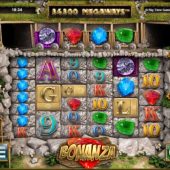 Bonanza slot from developer Big Time Gaming (BTG) is another in their 'MEGAWAYS' series and perhaps the best yet. Previously they issued Queen of Riches a pumped-up version of Netent's Twin Spin and Dragon Born which had no conjoining reels but comes with a free games feature where all spins were at the maximum 117649-ways. Bonanza has the same set-up where each of the 6 reels offers 2-7 rows on each spin but has some interesting enhancements.

The theme is a Wild West gold mining one and you have the predictable twangy guitar music in the background and booming noises when the reels stop. There are stacked symbols as you'd expect but single Wilds and unlike the other 2 games mentioned above, no stacked Wilds. The graphics are clean and themed around the mining style so expect rocks, wooden shacks and a water wheel for good measure.

The first feature is an extra rolling row of 4 single symbols above reels 2 to 5 which add effectively to the ways - if you got the minimum 2 symbols on all 6 reels instead of 64 ways you'd effectively have 324 ways as the middle 4 reels would be 3 symbols high. So now we see a first for BTG's MEGAWAYS games - cascading wins! Should you get any win whether or not it incorporates any of the extra symbols above, the winning symbols disappear and more symbols cascade down to replace them. There is no multiplier for successive cascades - until we hit the free games.

In order to trigger the scatter, you need 4 gold bar scatter icons anywhere in view to trigger 12 free spins. They have the letters G-O-L-D on them but don't need to appear in order and you are guaranteed the feature regardless as long as 4 Gold scatters are in view. They will always display separate letters of 'GOLD'. They may drop in during a spin, or maybe 3 appear and the last one cascades down after a win.

These 12 free games can only be retriggered for 5 or 10 extra spins if 3 or 4 scatters respectively appear in the extra row above the middle reels simultaneously. This could be very lucrative when you realize how the Bonanza slot multiplier works! The multiplier rises by 1x for EVERY win that appears and you may be surprised to know this doesn't just pertain to the successive cascade on the spin you are in, but it holds for the next: in other words, if you had 2 wins on free game 1 which increased the multiplier to 3x the next win would start at 3x and so-on. So in the latter stages of the free games features, you are likely to have a large multiplier active that makes even the small hits large wins. Considering the largest Diamond 5-of-a-kind pays a 50x stake, well you work out the potential...

Bonanza is an extremely popular MEGAWAYS slot from Big Time Gaming. The huge winning possibilities in the base game and feature and the extra row over the reels have changed the game. The multiplier system in the bonus round is unique and quite daring, proving that innovation is not dead in video slots. Bonanza features a 96.00% RTP, which is pretty much the average for modern slot games. Unfortunately, you cannot mute the irritating guitar overlay without losing the sound effects and for me, that was the only detraction from a decent slot that is not too brutal in the base game and has huge hit possibilities. The follow up to this slot, Extra Chilli is about the only high volatility slot that has any hope of eclipsing Bonanza's popularity, although there are some suggestions the Opal Fruits slot may have a chance of doing this. This is one goldfield I will stake a claim in...

Try our free online demo and see for yourself. Check out a number of other Big Time Gaming Slots.