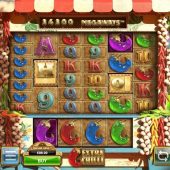 Extra Chilli slot from Big Time Gaming is the eagerly-anticipated follow up to Bonanza slot. Those not familiar with Bonanza slot (where on earth have you been) should know that it has become a phenomenon in the world of online slots. Therefore, anything likely to resemble it or be an improvement on it in some way is always going to grab plenty of attention. The theme is a fairly simple one - chilli's, however not in the same way as the super-popular Aristocrat slot More Chilli, which has a central male character. Extra Chilli is simply about the chilli fruits and they are all over the reels. As you might expect, the music on this slot is very much Latin-style, to compliment the theme. So will this MEGAWAYS slot put some heat into our balance or are we likely to end up feeling burnt?

There are 6 reels in Extra Chilli and up to 7 rows in the view. An additional symbol belt sits at the foot of the game, as opposed to the top like in Bonanza. With a MEGAWAYS game engine, you would probably expect Extra Chilli slot to have a lot of ways to win, and you wouldn't be wrong. A staggering 117,649 way to win at its absolute maximum. Top paying standard symbols are the purple chilli's, paying a handsome 50x your stake for 6-of-a-kind. Along with different colour chilli's, there are crystals, card symbols A-K-Q-J-10-9, making up the lower-paying symbols. The Fireworks Wild will substitute for all other symbols except the bonus scatters - more on them later.

When a winning line occurs, the symbols from that win will be removed and new symbols drop in to replace them. This continues until there are no new winning lines created.

Land the 3 scatters anywhere, spelling out the word H-O-T, and you will be rewarded with 8 free spins. Any extra scatters before or during the feature being activated will add 4 free spins. This can happen up to 7 times, offering quite a few extra spins. As with Bonanza, you get the growing multiplier, which goes up by 1 every time a winning line occurs.

As with BTG's White Rabbit slot, Extra Chilli offers a ‘feature drop’ which costs 50x your basic spin-stake - half the cost of White Rabbit. If you buy the feature drop, when H-O-T comes in on the reels it can add +4 to start the feature. If it doesn’t you can retrigger the feature on the scrolling icons bar.

Extra Chilli slot has a lot to live up to, joining such elite competition with other MEGAWAYS slots like Danger High Voltage and Queen of Riches. I am happy to say that I personally think this is going to be another huge hit, offering plenty of chances to win big. Extra Chilli appears to take the best bits of Bonanza and White Rabbit and mixing them together for something that has a different feel, but also familiar at the same time. Be warned that this is a high volatility slot, which will go on long lean spells. There are big wins to be had though, especially in the feature with those growing multipliers. The RTP for Extra Chilli is 96.20%, slightly improved for a MEGAWAYS slot. This is certainly some hot chilli that you will want to have a taste for yourself.