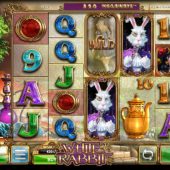 White Rabbit slot joins Big Time Gaming's increasingly popular 'Megaways' stable and somehow manages to combine elements of Dragon Born, Danger High Voltage! and Bonanza all in one go although to most the first game will seem the main inspiration. The reels lie over a cartoon sketch of toadstools with a daft-looking caterpillar on the left and we spin with the snicking noise typical of BGT slots and have the same tunes when counting up wins. The theme is vaguely based on Alice's in Wonderland it would seem, but will White Rabbit mean you are looking down a hole for your balance?

If you have seen games like Blueprint's Ted who intermittently wakes up and throws a random feature in for us, then here you'll see the Caterpillar on the left do so to. He can award 1 to 4 randomly placed Wilds which will show a 2x or 3x multiplier similar to those in the bonus spins of Raging Rhino and multiply any winning ways accordingly.

So 3 Rabbits appearing on the centre reels will trigger 15 free games which cannot be retriggered but will certainly be eventful! Your grid starts off with guaranteed reels (unlike the base game) of at least 5 rows each thus a minimum of 3125 ways. You will notice the Rabbits have gone but Cupcakes now appear on all reels. These will increase the rows for the remaining spins every time they land, so the first will guarantee 6 rows on any one reel, the second 7 and so-on.

Now I said you can't retrigger them which is true, but should you get any reel up to 12 rows by landing 7 Cupcakes on it over the 15 spins, you will get extra spins. The Pocketwatch appears and the hour hand rotates and will award 3 to 12 extra spins. This is repeated for every reel you get to 12 rows, so you could get up to 5 lots of extra spins which would have you on reels all 12 rows high and an incredible 248,832 ways for the remaining rounds! The bonus takes place over a moving background of the slot descending into a cave with blue fireflies and random objects from the tale such as chess pieces and a grand piano falling past the reels as you watch, which is very eye-catching to say the least!

Any reel(s) you do get to 12 rows will now become 'Queen's Reels' and have extra Wilds and Queens added to increase the chances of wins, especially the best paying Queen herself.

White Rabbit slot has tried to be very different despite the similarity of its symbols and sounds to Dragon Born. The bonus is incredibly entertaining and we get the dramatic music and slow reels whenever a big win is about to spin in, whether in the base game or bonus. The feature is not as hard to trigger as Bonanza's but you do get a watered-down version of Barcrest's Big Bet system although your price goes down as you play whereas on Big Bets it is fixed. Another positive is the very high 97.72% RTP which is only increased by 0.28% from 97.24% if you play 100-unit spins to get the feature every go as opposed to the big 2-4% jumps the Big Bet games tempt you with.

I don't like players being tempted to spend silly sums on often poor features so that's the only drawback here - just forget the purchase facility and treat it a guaranteed bonus round when you finally (eventually, sorry!) get the 100.00 down to zero. You've got a huge 97.44% RTP if you never use the purchase after all. Follow that bit of advice and you'll surely enjoy your trip to Wonderland with this rabbit... 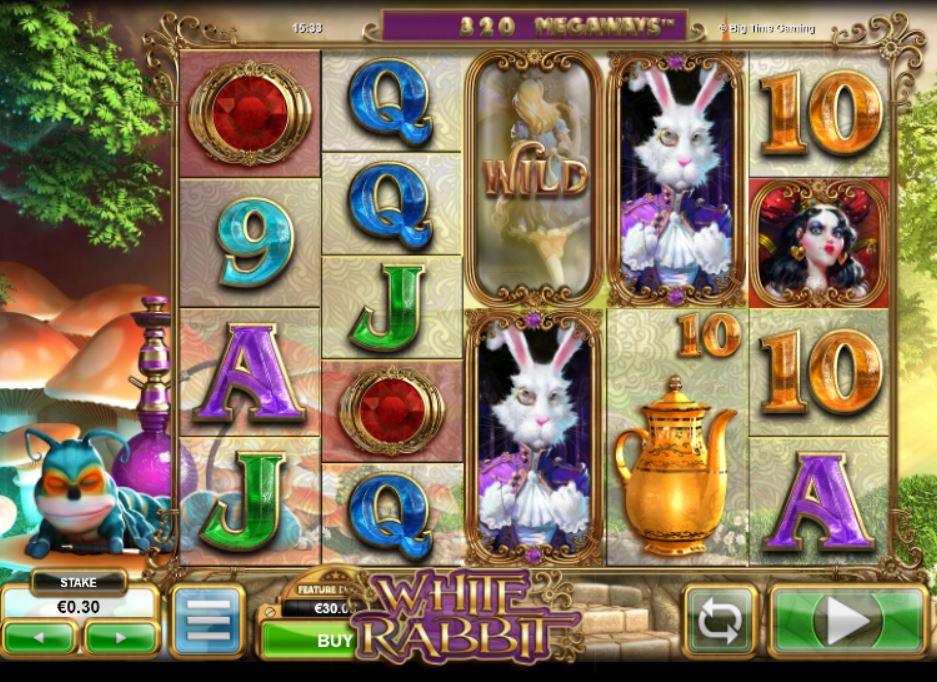