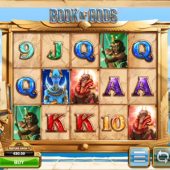 Book of Gods slot from Big Time Gaming has an Egyptian-theme and has the look and feel of Novomatic's Book of Ra Deluxe, with hints of Magic Mirror Deluxe from Merkur. The graphics and sounds are very much what you might expect from a developer who invests their time and energy into the math model of their games. They are simple, without being amateurish and compliment the game rather than being a distraction. Listen out for the reel sounds, which have a likeness to Aristocrat slots or even some IGT games. So the big question is, will these Gods deliver some ancient riches or will we end up wishing we had never entered this tomb?

This 5 reel, 3 row slot has a total of 243 paylines, which is a format which has gained a lot of popularity in recent years with titles like Microgaming's Terminator 2 and Novomatic's African Simba proving popular. The top paying symbol in Book of Gods is the Purple God, paying a princely 20x your stake for a 5-of-a-kind (5OAK). However, the other Gods pay significantly less for a 5OAK, with between 2.2-6x available. The lower paying symbols A-K-Q-J-10-9 make up the remaining picture symbols offering between 0.5-2x for a 5OAK. The Book of Gods scatter is the remaining symbol on the reels, also acting as a Wild, 5 of these on a payline will pay you 30x!

Keep your eye on the actual 'Book of Gods' in the base game. This will reveal a different lower paying picture symbol on each and every spin. Should the Book of Gods random symbol match symbols on the reels then they will expand to cover the whole reel (assuming they form part of a winning combination). This offers some nice rewards in the base game, especially if they land on multiple reels.

Land 3 , 4 or 5 scatter symbols and you will be rewarded with either 15, 20 or 25 free spins respectively. You will then be presented with a God, selected at random, which will expand over the whole reel if it appears as part of a winning line. Where this gets really interesting is if the feature retriggers, as you will get a further 15 or more spins and another God will be selected at random. This can happen up to a maximum of 3 Gods and the rewards can be absolutely staggering!

Just as in other BTG slots, such as White Rabbit or Extra Chilli you can buy the feature with the 'Feature Drop'. It is 80x your stake, but it does reduce as you play as their are contributions made to the total when you land the BTG coins.

Book of Gods slot is an interesting take on popular slots like Book of Ra Deluxe or Thunderkick's The Falcon Huntress. It is volatile, there is no mistaking that and you would be wise to treat this game with some caution, as you may with BTG's Bonanza or Leander's Afterlife Inferno. Saying that, high volatility slots players should get something out of this slot as an interesting alternative to other games in a similar bracket. The RTP on Book of Gods is 96.35%, which is pretty good. I will be certainly be paying another visit to these gods, but I will keep in mind how very volatile they can be...