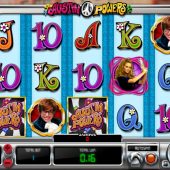 Austin Powers slot is obviously based on the series of comedy spy films starring Mike Myers from 1997 (Man Of Mystery) 1999 (the Spy Who Shagged Me) and 2002 (Goldmember) which are humourous send-ups of the famous Bond films. Nobody does these film-based themes quite like Blueprint as we saw with The Naked Gun and Ted and here we get a mash-up of all three films' characters and story lines. We get the unmistakable music from the film as a soundtrack including when the reels spin and a quiet 'bloop' as they stop and the game sits on a picture of Austin's control box. All that remains is to discover whether our balance will become golden or will it get shagged!

A standard 5 reels and 3 rows with 25 lines follows the usual Blueprint format and we get single symbols bar the game's icon which appears stacked on all reels. No doubt we'll get a serving of random in-play features but first let's see the pays - the flowery Wild pays 20x bet for a 5-of-a-kind, the Austin Powers logo 16x, Austin himself 12x, Dr. Evil or Felicity Shagwell 8x with 5 card values offering either 2 or 1x for a full line.

Well, the random features are just as batty as the character list and we begin with 'Sharks with frickin' laser beams' when a pool appears under the game and the sharks will zap 1 to 5 reels turning them Wild!

Dr. Evil may also appear and nudge the reels up and down for a guaranteed big win and finally a vial of Mojo might shatter over the reels and turn Wild in 3 to all 15 positions.

This is quite good as if you trigger this with 3 Spiral scatters you go to a Bonus Selector machine which chooses one of 6 features for you. If you trigger with 4 or 5 scatters a multiplier of up to 10x is given on the final total of any of the 6 features.

The Cryo Lab - a naked Austin is decontaminated and has to 'evacuate' but luckily behind a screen! The longer he takes, the more you get.

Fat Bastard free spins - you get 6 spins and a colossal 3x3 Fat Bastard Wild on the reels.

Mini Me free spins - 10 spins with Mini Me sticky Wilds which stay for all remaining spins.

Fembot free spins - 5 spins with 1 to 5 Fembot stacked Wilds landing on each one.

Volcano Lair bonus - choose Austin or Felicity to search the spy bag, the more they find the more you win, but an explosion ends it.

Submarine Lair trail - pick a box and you will get a number moves along a trail where you will discover Golden Keys each of which increases the trail's prizes. Find enough and you will the game's jackpot.

Our View...
Austin Powers slot is packed with features and has the potential for some big wins too. The RTP is fine at 95.53% with the random in-play features quite regular although the Bonus Selector is a little harder to achieve but rarely disappoints, especially with the three different free spins possibilities. Blueprint have worked hard on the graphics and animations too so fans of the film will not be disappointed as the game is very true to the theme. This is my personal favourite of their film-based slots and let's just say Austin will certainly spy me in the neighbourhood once more...