Andy Capp slot is based on a comic strip created by cartoonist Reg Smythe, which has be seen in The Mirror newspaper since 1957. Andy Capp is working class man from Harlepool who enjoys football, darts, pigeon racing, going to the pub and betting on the horses. Before the arrival of this slot, Andy Capp was used as a theme for several Fruit machines (AWP’s) in land based venues around UK. The slow plodding background music suits this hapless character, who is just looking for a quiet life. So will Andy Capp get lucky with our bankroll or is he likely to fritter it all away on our behalf?

This is very much a run-of-the-mill 5 reel, 3 row, 20 fixed payline slot. It is part of BluePrint’s Jackpot King series and has 3 levels of Jackpot included in the game. Top paying symbols are the Wild and the Andy Capp logo, offering 25x for 5-of-a-kind (5OAK). The pint of ale, sport, newspaper and TV symbols pay between 4-10x for 5OAK. Remaining symbols include all the standard card symbols A-K-Q-J, paying smaller amounts.

Land 3 bonus symbols on the reels in Andy Capp slot and you will be rewarded with 1 of 5 bonus games, which are as follows:

The Jolly Riveter super bonus - Play through a super spin and pick up Andy Capp symbols. Each one you collect increases your total win.

On Me ’Ead free spins - There are an unlimited number of free spins available, as you head the football into the goal adding sticky Wilds to the reels. The feature ends when the referee blows his whistle.

The Bookies bonus - Pick a betting slip to determine the volatility of the bet. Then Andy goes into the betting shop (bookies) and picks a rosette for the multiplier. Eventually you pick trophies to reveal you reward.

Lets Play Darts bonus - Andy throws 3 darts at the dart board to reveal a cash total. This game is capped at 180x.
Hungover Andy - Andy’s dreams turn into mystery symbols on the reels, creating winning possibilities. The feature will be ended by Mrs Capp turning up and ruining Andy’s dreams.

Andy Capp slot is another very forgetful slot joining a small number of low volatility, multi-feature slots from BluePrint Gaming. The game has a staggering low RTP of 92.75%, which is likely to do with the jackpot contribution, but is still very embarrassing. This theme does seem a go-to one for this developer, who have also produced Viz slot. However, this drunken lay-a-bout should have been left on the couch to sleep off his hangover, rather than being turned into this mediocre slot game. 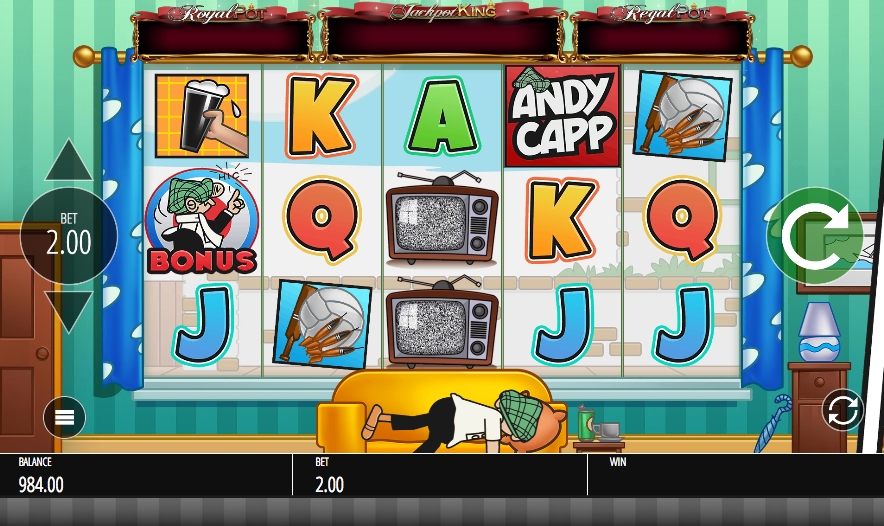