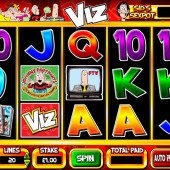 For Brits of a certain age, Viz comic will hold a special place in their hearts. For the uninitiated, here’s a quick introduction.

Viz Comic was started in Newcastle in the late ‘70s and distributed among the working-class pubs of the city. Home-made, scatological and extremely puerile, the comic was definitely not for kids.

Over the years, it grew and grew, and unleashed legendary characters like the grotesque Sid the Sexist, the flatulent Johnny Fartpants and the well-endowed Buster Gonad (with his unreasonably large testicles) on an unsuspecting British populace.

Thirty years on the comic is still going strong, and as anything gets turned into an online slot these days, slot developer Blueprint Gaming have taken the world of Terry Fuckwit and Roger Mellie, and made a game out of it.

A 5 reel, 20 pay-line fixed slot, Viz features all of your favorite comic characters, plus images of the front cover and some suitably comic-looking 10-through Ace symbols. I would have liked to have seen some animation or jolly music in the background, but when you design a slot based on one of my teenage pleasures (no, the other one) I’m not complaining.

Bets are fixed, but coin bets start at just $0.01 here, so everyone is catered for. Five Super Wilds across the reels, however, could bag you a potential $25,000 jackpot win. Not only that, but the Wild – which substitutes for all symbols other than the bonus Scatters - multiplies all winning combos it helps form by two.

There are three bonus rounds in Viz. First up is the Roger Mellie Bonus Show free spins, based on the potty-mouthed TV presenter. You can trigger this with three or more Roger symbols across the reels, and the more you hit to trigger the bonus, the more free spins you’ll win. So far, so standard, until you realize that anywhere from 50 to 200 spins can be won.

Another legend of the comic, Johnny Fartpants, is honored with his own bonus round - Johnny’s Wheel of Fartune. It’s triggered by three or more Johnny symbols anywhere on the reels, and you simply have to stop the spinning wheel to earn multipliers and winnings.

Win 500x Your Line Bet with the Usual Suspects

Finally, the Usual Suspects bonus round is activated by hitting three or more Usual Suspects icons anywhere. At the start you simply have to choose from Biffa Bacon, Roger Mellie, Sid the Sexist, Johnny Fartpants or the Fat Slags to earn yourself a bonus multiplier. The top whack here is 500x your line bet, so the rewards can be huge.

Looking for More of the Same?

If this has put you in the mood for more British silliness, check out any number of Sheriff Gaming 3D offerings, such as the Dr. Magoo’s Adventure slot, or Playtech’s take on the classic movie, Monty Python’s Holy Grail.

Viz Comic is as British as fruit machines, so it’s reasonable to expect a Viz slot to have come out. Come to think of it, why didn’t Blueprint make it a Classic slot with cherries and grapes? Perhaps we would have got an image of Johnny Fartpants farting out a lemon. Just a thought!