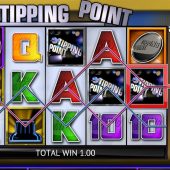 Tipping Point slot is themed on a British TV family game show of the same name, which itself is based on those dreadful '2p Pushers' still for some inexplicable reason found in seaside resorts around the UK. If you have visited these places you will be aware of those pushers where you shovel coins in with the vain hope of tipping an unstable pile of them over the edge into a payout tray. You try and drop your coin in the right place using timing as the tray moves in and out. You will achieve this many a time only to see the pile you've dislodged fall down the side into the operator's 'profit box' while 1 or 2 coins actually fall into your tray that you've spent 20 coins getting there.

For some reason someone decided to base a TV game on this idea and Tipping Point was the outcome, where prizes are awarded for coin falls to the contestants who win discs to place in the Pusher. In the UK the 2p Pushers are classed as 'Amusements' so will this slot live up to that name?

We begin with 20 pay lines over 5 reels of 3 rows and naturally have the tension-building musical soundtrack and effects from the actual show when the game is played. Your title icon is the highest symbol paying 25x bet for 5-of-a-kind followed by the tipping machine at 15x and the white and black discs which act as the coins at 10 and 5x bet respectively. The remaining pay symbols are the card ones paying 2 or 1.5x stake for the 5. There are no Wilds on the reels though; we don't see those until the free games bonus but there is a red bonus star on reel 5 which is vital for Tipping Point's jackpots feature, as you have some 3 progressives in play, the Bronze, Silver and Gold.

There is a red square on the centre of reel 5. If the star lands in this it will fill the meter of 10 blank stars with 3-10 stars, so if you're lucky (or unlucky as we will see...) you may get the trigger for the jackpot game all at once. Otherwise the red star landing outside this box on reel 5 will award one star to the meter. So, you've filled the meter and then what? Well you start the most tedious and long-winded bonus you'll ever see!

You are taken to the Tipping Point machine and get 6 attempts. You pick one of 3 boxes which will either give you one, two or three coins to drop in the machine and if you get more than one it's unusual. There are 4 sectors you can drop the coin in but the game picks them for you. The machine has white and black discs in which award 1x bet if they fall into your collect tray. Some may have a bet multiplier on them such as 3x or a mystery value. Naturally the Bronze, Silver and Gold discs are in amongst the coins in the machine and knock one of these into your collect tray and you win that progressive! This animation, from picking the box for the number of discs to the end takes just under a minute and you have 6 rounds.

Land 3 bonus scatters anywhere in view and we are treated to a far better award. You get to pick from a screen of 24 black and white discs (counters to some) which give free spins, multipliers and card icons which will then become Wilds in these spins. It's like Netent's Secret of The Stones bonus in many ways as your enhancements are decided by picks. You start with 5 spins and hope you can pick a few multipliers and card icons before the 'Start Bonus' is revealed. You might be lucky and end up with say 12 spins, plus A, K and 10 all Wild and with a 4x multiplier. You can't retrigger but get a paltry 2 extra spins if 3 scatters land during them. These spins can pay quite well and are rarely disappointing unlike the Tipping Machine bonus above.

Tipping Point slot is a vast improvement on Core Gaming's other TV-themed game Sean Kelly's Storage Auctions, a diabolically poor game. The graphics are crisp and smooth, the musical score from the show easy to listen to. The free spins/counters are good, as is the RTP of 95.02%. The drawback is the terrible jackpot Tipping Point bonus. You waste several minutes of your life to get a win averaging 4 or 5x your bet. I would happily pay 4 or 5x my bet to avoid it, as you can't autoplay it. It only exists to pay the Progressives so unless you are extremely fortunate you will see it as 5 minutes of your life wasted; a truly unnecessarily drawn-out animation and game. Unfortunately Tipping Point too often had me at boiling point...

If you don't know anything about Tipping Point, check it out on that website that sells books, food and everything else with a feature called "Prime", a toy shop might even have it stacked somewhere near Kerplunk.