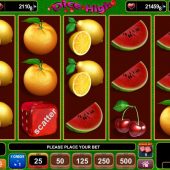 Dice High slot could well make you think of other EGT games of this theme which are pretty basic and have no feature, such as 100 Super Dice but luckily we do get one here as with Cozy Games' Diamond Dice so all is not lost! We see the basic fruit symbols and plain reels on a green baize background and there is the familiar comfort of your EGT trotting sound as you spin along with flaming symbols too when they form a win. Can Dice High make our balance high too?

Twenty paying lines greet us on the 5 reels of 3 rows each and naturally the icons are all stacked bar our Dice Scatters. We have to pay 25 coins per spin though presumably to cover the bonus game. The Red 7's offer us the best pay at 40x bet for a 5-of-a-kind hit thus 800x bet for a full screen. Grapes are 16x, Plums or Melon 8x, Lemons, Cherries or Orange 4x. If you land 5 scatters you'll see a nice 160x bet but 3 or more will suffice to let us into the bonus game.

Well, it isn't called 'Yahtzee Bonus' but that's the game you play after hitting 3+ scatters. Of course there is a famous slot based on this popular Dice game, WMS' Yahtzee!, but we get nothing that flashy here, just a green baize and a cup to roll. You simply get 3 rolls of the 5 Poker Dice and the game will automatically hold the best ones each round before you roll the remaining dice. The prizes pay according to a scale:

Dice High slot is quite novel in its own way as the base game can reward you well in addition to the feature game. Wins are frequent and the Yahtzee game isn't too hard to trigger unlike features on most EGT games. The RTP is their usual 95% and the spectacular flaming graphics and animations are always good to watch when you win. The only criticism would be that the bonus is over very quickly as you would expect with three dice rolls and the top awards are hard to hit. In spite of that the slot is quite playable and I will be back to shake that cup again....