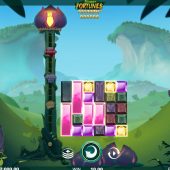 Flower Fortunes Megaways slot is by Swedish developer Fantasma Games, a relative newcomer to the online slots market. It will be available on Microgaming's Quickfire interface for players at multi-platform casinos too.  If this slot is anything to go by, then there's plenty of imagination there as we have a very unique mechanic for this Megaways License in play here. The theme is an idyllic scene of rolling hills and valleys with flowers waiting to blossom and there's some soothing fairy tale-style music as we play. You might have observed how small the reel set looks here but that's for a very good reason as we'll discover shortly. We don't have a triggered feature via scatters in the game, so in that respect it's like Queen of Riches, Slots O' Gold Megaways and Thunder Strike Megaways but will these flowers turn our bankroll into a blooming fortune nevertheless?

We start with a grid of 6 reels of 2 to 5 rows each thus initially getting 64-15625 ways per spin which we pay 50 coins for. There are single and stacked symbols of which the 6-of-a-kinds pay 50 coins for Pink Gems, 30 Purple, 20 Green and 15 Blue with 5 clay tiles of differing colours paying 10, 7 or 5 coins for a full way of 6. Tiles cascade but aren't replaced unless in the top Avalanche feature.

You will notice a giant plant like something out of Jack and the Beanstalk to the left of the grid. On this there are 3 positions to fill before you hit the first reward, the Wild. Three more positions activates the Respin, then it's the Bonus and finally should you make the flower bloom right at the top, its the Avalanche.

So how do we rise to those activators? Well randomly you'll see Energy Orbs or Leaves overlay some reel tiles. Orbs will raise you a position, leaves remove a position. Each level raises the reels by 1 row each.

Wild - Expanding Wilds can now appear anywhere on the grid except reel 1 and will have a random 1 to 9x multiplier.

Respin - When a Respin Symbol lands on the reel a random number of non-winning normal symbols are replaced with new ones. Bonus, Wild, or even new Respin Symbols can be added in this way.

Bonus - Deal or No Deal Bonus type round with rubbish prizes if you see 3 bonus symbols when this is lit.

Flower Fortunes Megaways slot is really fun to watch and isn't that volatile in the base game due to a high win frequency and low line pays. That said, we have a 96.00% RTP and Fantasma tell us the best win in testing for compliance in 1 billion spins was 18,480 x bet which must have involved 4 or 5 reels of Wilds on huge multipliers in the Avalanche with a decent multiplier already accrued via the winning actions. The good thing here aside from the quirky looks and sounds is the mechanic, as you can lose a level only to get it back next spin, including the top feature. So you'll be unlucky to play any length of time with no levels activated. You won't see a fortune made here, but those blooms may be quite long lasting when it comes to your turnover...