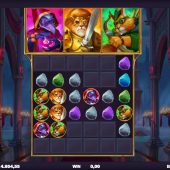 Heroes Hunt 2 Megaways slot by Fantasma Games is the sequel to Heroes Hunt Megaways slot and brings us even more colour and action. It's not got the quirky up-and-down feature of the rather odd Flower Fortunes Megaways slot they made when first using the Megaways model and not the tedium of the far simpler Maze Escape Megaways slot that they released later. You have a candlelit castle hall as the background, classical music and battling sound effects although the characters are a little juvenile and cartoon-like yet again. Then again, the theme is a medieval fantasy adventure so to that end it's executed very well. So can we hunt down some gold here for our bankroll or will it go from hero to zero?

On the reels...
You get a 6x6 grid here on Heroes Hunt 2 Megaways slot with 2-6 visible symbols on each of the 6 reels so 64-46656 ways. Symbols can appear stacked and you will see 3 characters at the start above the reels which represent modifiers you need to unlock. The 6-of-a-kind pays are 10x Vampire, 5x Lion, 4x Raven, 3x Cat, 2.5x Crown, 2x Coin and 1.25 or 1x for the 4 low-value crystals. There are no tumbles here but the Hero modifiers need opening up. The non-symbol grey tiles on the grid are known as Blockers and some modifiers may remove some of these to expand your number of ways in play.

Heroes
Up the top you get 3 dulled-out hero characters. Each time a Chest lands, it will reveal one of them and after 4 each they will activate. The Chest disappears from the reels after they all activate and thereafter it remains that way, even after you leave the game and return. The Chest may also reveal Werewolf spins but we'll come to the features later. Once you activate the 3 Heroes, the Chests vanish and you can now get the Key scatters land on the reels to trigger the main bonus as well as the 3 symbols pertaining to the Heroes to trigger their modifiers:
Wizard - creates a Purple Orb symbol which can appear once or twice on reels 2-5 for the Explosion Feature. It will remove itself, non-winning regular symbols and blocker symbols in 1 or 2 at 2x2 areas or a single 3x3 area around it, replacing all exploded positions with the same standard pay tile.
Warrior - creates a Sword symbol which is an Expanding Wild that also adds one single Wild to a random position and offers a 2-6x multiplier. You can get two or more of these, in which case they multiply each other.
Archer - creates a Crossed Arrows symbol on 2-5 and more than one can land. Effectively awards a Re-spin and removes 4-9 non-winning or blocker tiles. You also get 1x multiplier for each block or non-winning tile removed so can get from 4 to 18x for any wins in the round.

Free Spins
Werewolf Spins - you get 10 of these for the Chest revealing them but this means you're only ever likely to see them during the first few minutes of play before the Heroes are activated, although they can be bought for 30x bet in some countries. During them, Werewolf Wilds can appear on reels 2-5 and when they do, any adjacent Hero symbols into Wild too. No extra spins, no retriggers.
Vampire Free Spins - 3 Keys trigger these (or a 100x buy in some countries) and you begin with 10. You can land the Hero modifier tiles during them too. As in the base game, the top-pay Vampire symbol appears on 1-6. Any that are involved in wins, or removed by any modifier for example the Expanding Wild covering one or the Archer firing them away with arrows, will add +1 spin. You will also see the caged Vampire above the grid with 12 bars underneath him. If you manage to collect 12 Vampires, he is freed and will grant 2 Super Spins, but it's rare!
Super Spins - unlock the Vampire you get 2 of these. The grid is now fully expanded to 46656-ways and only Wilds or regular pays can appear, no modifiers. You will now see the Vampire is replaced at the top by a gravestone and on it is a 100x multiplier for the 2 spins! There is a 20,000x win cap here.

Our View...
Heroes Hunt 2Megaways slot has a RTP of 96.20% with nothing unlocked and up 96.58% with the 3 Heroes active. Buying Werewolf spins means 96.82% and Vampire spins 96.97% so no issues in that respect. The overall appearance, ease of play, animations and sounds are very good as they were in the first edition. The base game is surprisingly productive for a volatile formula mainly through the expanding Wilds appearing twice it has to be said, or one with the Archer at the same time adding its 4-9x multiplier to the Wild multiplier. The free games are very hit-and-miss with either totals way under 100x bet or counted in the hundreds so be prepared for ups and downs there. Don't worry too much about not triggering the 2 Super Spins as on both occasions I did eventually, they paid about 3-400x for the whole round and I had far higher without them. If you hunt down some good wins on this game, you could well end up a hero yourself...