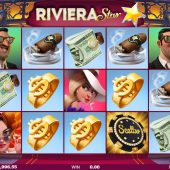 Riviera Star slot by Fantasma Games brings us the glitz and glamour of the lives of the super rich. Nothing new here, we've seen this covered by numerous slots before. My favourites were the older Cryptologic ones such as Millionaires Club which I thought was better than Millionaires Club 3 and who can forget Netent's attempts at emulation, namely Mega Fortune Dreams. So we have the facade of a posh hotel as our backdrop and that awful 1970's funky-jazz style music as we risk our cash for a share of this wealth apparently on offer. Will our bankroll be raised to riviera level here or will it be one-star accommodation for us?

We get 20 fixed pay lines so five reels of three rows apiece although they spin as 15 separate tiles. Symbols are single but can appear more than once in a column with 5-of-a-kind pays at 4x bet for the Yellow Lady, 2.5x Pink Lady, 2x Green Male, 1.5x Blue Male with lows pays being Ring, Watch, Banknotes, Cigar and Champagne from 1.2 down to 0.75x for a full line. Wilds in the form of Stars can appear on reels 2 to 5 and a Casino Chip scatter on any of the centre 9 positions. We do get some fun in the base game though!

As with games such as Jack Hammer, winning lines freeze in position and the non-winning tiles respin until the win is not improved any further, then it's paid.

Randomly a single sticky Wild Star is placed anywhere on the centre 9 positions. It has 3 lives and one is lost each time no win occurs using it. If you get any additional Wilds whilst it is live, then the multiplier increases by 1x and this goes on using separate paid spins until the 3 lives are used.

You can accumulate the 3 Casino Chip scatters during spins occurring in the Respin Feature as described above, or they may come straight in. You have 10 free games which can retrigger in the same way and the modifier here is that the Superstar Feature with the sticky Wild is present every spin and the multiplier doesn't reset between rounds. As before it is increased 1x by any other Wild appearing on the grid and the Respin Feature is also active as in the base game. Good fun actually.

Riviera Star slot is not a game with huge potential but despite the corny theme and music I found it very entertaining, with good balance longevity and some reasonable base game hits. The graphics and animations aren't that complicated and the free spins are quite absorbing but you'd do well to exceed 200x in a bonus here, then again as I said this slot isn't all about huge potential. Your RTP is 96.20% which is fine and I reckon you could do well to take a trip down to the Med and mingle with these moneyed people...