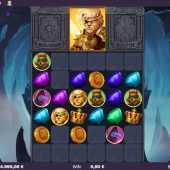 Heroes Hunt Megaways slot is Fantasma Games' third use of the now infamous BTG Megaways mechanic. Their first, Flower Fortunes, was weird and a bit convoluted but did have a cult following. The second, Medallion Megaways, was a bit more in line with the traditional mechanic and I have to say this game has a very similar maths model to the latter. Like Temple Tumble Megaways slot, here we have a mysterious cave in the background but in this instance with rather silly fantasy characters and inane sounds and music as we play. So will these heroes be hunting down our bankroll here?

We get 64-46656 ways here on Heroes Hunt Megaways slot and all tiles are individual with wins unlocking more blank spaces as they go until the whole 6x6 pattern is active. The 6-of-a-kinds are 20x for the Red Dragon, 10x Lion, 8x Raven, 6x Fox, 4x Crown or Coin with 4 Gems paying 2 or 1x for a full way of 6. You can't get Wilds without modifiers but we do get special symbols to help us and we must choose one of the 3 modifiers to be active when we begin play at any particular stake. Winning symbols are replaced by more tumbling from above.

You'll see 3 Heroes above the grid and you can choose one to be active before the remaining 2 are activated by getting their 3-segment meters filled via the Chest which can only land on reel 6.
Raven - Explosion Orb which removes blocking stones and non-winning symbols in either a 2x2 or 3x3 pattern around where it landed. If you win, any new symbols tumbling down will all be the same type.
Lion - Expanding Wild with a 2-6x multiplier is awarded anywhere on reels 2 to 5, one per Sword which lands. If you get more than 1, they are multiplicative of each other.
Fox - Re-spin feature where 6 to 12 non-winning symbols or blocking stones are removed for more to tumble down.
Mimic Free Games - if the Chest lands and doesn't select one of the 3 Hero modifiers then it could award 10 free games. All 3 Heroes will be unlocked and Mimic Wilds can appear on reels 2 to 5, but are disguised as normal symbols! The Heroes above the grid return to the same state after the spins have ended.

You can only trigger these when all 3 Heroes are unlocked. When they are, you will no longer get Chests on reel 6 but will see Arrow scatters land, of which you need 3 for the 10 Dragon Spins. You can now land a Dragon anywhere on all 6 reels and each one landing will award one of the 3 Hero modifiers. If the Dragon is destroyed by a win, modifier or tumble then you get 1 extra spin for each one. When they've finished, all the Heroes are reset and you start off afresh by choosing another for the base game.

Heroes Hunt Megaways slot is a bit dull to look at and listen too and is really only a variant of Medallion Megaways anyway. Your RTP is good though at 96.65% although it can vary slightly over or under depending on the Heroes in play. The features aren't hard to get but all the free games I saw were quite disappointing despite them telling us we can win up to 26,000x bet. I can't see how, unless you had top symbol on the outside reels and 4 of 6x Wilds in the centre! Yep, I won't be hunting down these heroes in future...