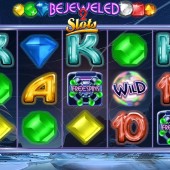 Bejeweled began life as a classic puzzle game where players would have to match up several of the same gems in a row to eliminate them and eliminate as many of the gems as possible.

In essence, it is much the same as another popular game that is also now a slot game: Chuzzle.

The online fun game Bejeweled became a firm favorite in my household with my mother, father and brother all playing it constantly due to its addictive nature and sense of achievement.

So when Bejeweled 2 was released, this only fueled their love of the game.

Bejeweled 2 Slots exposes the Bejeweled franchise to a whole new audience and I am afraid to say that it looks like the slot release might prove to be just as popular as the original game itself.

The slot is a 5-reel, 20 payline game that does not drift too far from the structure of the original game.

The different color gems make up a lot of the symbols and the feel of the game means you will be easily fooled into thinking you are playing a game of Bejeweled 2 as opposed to the slot version.

Sparkle with the Wild Gem

The Wild Gem acts as the Wild symbol in Bejeweled 2 Slots and it doubles any pay outs that are triggered when it substitutes for another symbol to complete winning combinations.

Win Prizes in the Original Bejeweled with the Cascading Reaction Bonus

Interestingly, there are three different Scatter symbols in Bejeweled 2 Slots. The first is the Bejeweled Bonus symbol.

If you hit three or more of these Scatter symbols across the reels then you will trigger the Cascading Reaction Bonus feature. In this feature, you will be taken to a game where you are basically playing the original Bejeweled 2 game.

You will get a win every time you match three or more identical gems in a row. You could be lucky enough to hit the Hypercube gem which will explode and eradicate all gems of one color to reward a big win. There is also a Powergem present in this feature that doubles the value of any payouts.

You will instantly be awarded with 15, 25 or 50 free spins depending on how many Free Spins Scatter symbols you hit to trigger the feature.

Win a 500x Multiplier in the Wheel of Riches Bonus

Finally, the third Scatter symbol is the Wheel of Riches symbol.

Hitting three or more of these across the reels will trigger the Wheel of Riches Bonus feature. In this feature, you are presented with a spinning disc.

This disc will eventually stop spinning and land on a multiplier value; it will then multiply the trigger bet you placed at the start of the spin and reward you with the prize. This way, you can trigger a multiplier up to 500x.

Bejeweled 2 Slots is a fantastic game for fans of the original Bejeweled and Bejeweled 2 but it will also appeal to slots players of all genres.

It cannot really be compared to any other slot games out there because the Bejeweled franchise has created its own identity in its own right but it will certainly rival some of the biggest slots out there such as IGT’s Egyptian themed Cleopatra 2 and Microgaming’s Thunderstruck 2.

The win potential on this game is pretty awesome and the fact that it manages to fit in a tip of the hat to the original Bejeweled game through the Cascading Reaction Bonus is also a pretty cool feature.