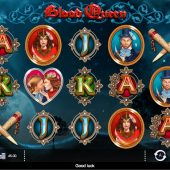 Blood Queen slot from Iron Dog Studio is a gothic-themed game, which instantly draws comparisons with Microgaming’s super-popular Immortal Romance. Other slots, such as Genesis Gaming’s Gothic slot and Ash Gaming’s Full Moon Fortunes have tried and possibly come up short in this genre, so Blood Queen has a lot to live up to. However, when you first set eyes on this Iron Dog game you get a sense that the developers have got it right here. From the colour scheme to the choice of symbols and not forgetting the horror-inspired sounds, this slot has put a great big green tick in the box marked 'theme'. But, when we get down to it, will this game be frighteningly good or horrifically bad for our balance…

A quick glance at the payable on Blood Queen and you will get a sense of what to expect. This 5 reel, 3 row and 30 payline slot has a volatile look about it. Top paying symbols are the Blood Queen at 33.3x for a 5-of-a-kind (5OAK) and Van Hell symbols paying 26.6x for a 5OAK. Other symbols pay slightly less include the rubies, demons and steaks and the A-K-Q-J card symbols.

The gargoyle Wilds can land on all reels and substitute for all symbols except the the bonus scatter. These will only appear on the top position of each reel and will expand to cover all 3 positions on the reel. It is also worth noting that you can get more than 1 Wild appear in any spin.

There are 2 free spins features in Blood Queen and you get to pick which one you want to play out. To trigger the free spins feature you need to land 3, 4 or 5 bonus scatters anywhere on the reels and you will be awarded 20, 30 or 50 free spins respectively. You then get to choose:

Van Hell Holy Water Wilds - During the free spins Hold Water Wilds will appear on the reels. These Wilds can multiply, creating even more winning possibilities. The Wilds will stop multiplying if no new ones appear in different positions, however it can all start over many times during the feature.

Blood Queen Walking Wilds - As the feature progresses you will likely get Blood Queen Wilds which will cover all 3 positions on the reels. These will walk a reel to the left with each spin, similar to NetEnt’s Robin Hood Shifting Riches. More than one Walking Wilds can appear on the reels in any one spin.

I like Blood Queen slot, a lot! This is a volatile slot game offering a very nice balance of base game wins and feature wins. Despite the free spins feature being quite hard to trigger it does tend to deliver when it eventually comes in. Blood Queen offers a healthy 96.06% RTP and fun and entertaining theme and a very enticing opportunity to win up to 4000x in one spin. Be warned though, volatile slots like Thunderkick’s The Falcon Huntress, Play’n Go’s Imperial Opera, Leander's Afterlife Inferno and Blood Queen is that you can very easily burn through cash chasing features if you are not careful. This is one scarily volatile slot, but the fright is worth it!