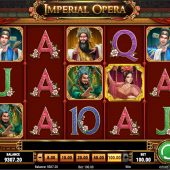 Imperial Opera slot from Swedish developer Play’n Go provides lavish style and drama from an an exquisite Asian opera house. This graphically beautiful slot has been meticulously created to provide stunning, yet subtle game interactions. It follows close on the heels of other Play’n Go slots - Gold King and Planet Fortune. Gentle and non specific tones play in the background with the occasional lift as winning lines are formed or features are expected. So will the Imperial Opera leave us wanting an encore or will we be wishing we had never bought a ticket?

On the reels…
A look over the payable on Imperial Opera and a few things become very clear. This 5 reel, 3 row slot has 20 paylines and is highly volatile! Picture symbols are all the characters from the Opera and range from 50 - 7.5 coins for a 5-of-a-kind (5OAK). Card symbols A-K-Q-J-10 range in value from 5-2.5 coins for 5OAK. An interesting observation is that these symbols have a similar look to those in Book of Ra Deluxe, especially when they appear stacked. The Princess symbol is Wild and substitutes for all other symbols except the Scatters.

Showcase and Mega symbols
During each spin on Imperial Opera slot there will be one symbol, chosen at random, that will be stacked on the reels. This is the ‘Showcase’ symbol and can create bigger winning opportunities. Character symbols in the game can form a ‘Mega symbol’, filling 9 positions stacked together.

Crescendo Wilds
In the base game there is a feature called Crescendo, which is activated randomly. This feature will make up to 2 become stacked Wilds, creating some interesting winning opportunities. In any giving playing session you should see this feature quite regularly.

Free Spins feature
The Free Spins scatters form a Mega Symbol in the shape of a giant golden gong. When it is on complete display you will release 10 Free Spins. This is when things get really exciting, as reels 2, 3 and 4 remain as a Mega Symbol throughout the feature. All it takes is reels 1 and 5 to line up and you could be in for some epic wins. According to the payable you can win up to 2500x in a single spin! The feature is able to retrigger should you land the Free Spins scatters in the Mega Symbol position.

Our View…
Imperial Opera slot has all the potential of becoming a massive hit with high volatility slots players, who love the tension and drama that comes with this type of slot. I am thinking that Bonanza, Book of Ra Deluxe and The Falcon Huntress fan will be adding this to their regular play list. To compliment the games high volatility is a 96.5% RTP, which is likely to make it even more appealing. If you don’t mind the rollacoaster ride that comes with volatile slots, then its definitely worth buying a ticket for this Opera…