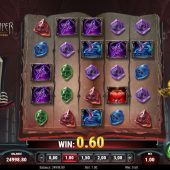 Alice Cooper Tome of Madness slot by Play'n Go is a good addition to their already extensive heavy metal series. You must have seen Saxon slot or if into a more Germanic sound, Helloween slot although my choice in the series has been Saboton slot thus far. This time though we get a grid game, an eerie dark castle keep as the backdrop with Alice Cooper in chains to the right and violent sound effects to go along with the music. So can we unchain some money here for our bankroll or will madness be the outcome for us all?

On the reels...
There are 5 reels of 5 tiles each with winning ones replaced from above on Alice Cooper Tome of Madness slot. You need 4+ adjacent to win and 15+ is the top pay. These are for 15+ or 4 respectively: Heart 200/2x, Snake 120/1.5x, Cross 80/1x, Spider 40/0.5x with 4 Stones of 10/0.3x down to 4/0.1x. Book Wilds can appear anywhere and Keys are needed to unlock Alice, so collecting 3 releases his Mega Walking Wild Reel on to the grid with any taken key being replaced by a Wild. This what tends to trigger the Reality Spins. The winning tiles are counted in the Skull Hat on the left and features are triggered within the same spin by collecting enough. Naturally Alice has some modifiers for us!

Hat of Madness
You have 5 levels triggered by winning tiles in the same spin. The Skull Hat shows you how many and there are 5 levels:
1-2 Wilds - added when the level is reached.
3-6 Wilds - same as above.
Reality Spins - 3 spins with a modifier chosen by you from the above, actioned on each of the 3 free spins.
Reality Spins x2 - same as above but with a 2x multiplier.
Reality Spins x5 - same as above with a 5x multiplier.
The Mega Wild in this round spits out more wilds usually and we are told 3,000x is the best to expect here so not as much potential as with most Play'n Go slots.

Our View...
Alice Cooper Tome of Madness has a 96.23% RTP but can go to as low as 84.23% at some casinos so check! The game looks and sounds good but the frequency of the key landing and Alice saying "that's what I need!" gets a little tedious quite quickly. Little of value seems to occur in the base game and when it does, it's usually on the triggering spin for the Hat of Madness features anyway. These can pay quite well but I think Mr. Cooper will prove to be very stingy with his 1000x plus wins here! Good for a bit of fun is our vampiric rocker, but this one won't go platinum...