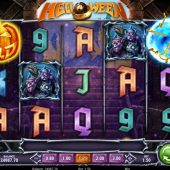 Helloween slot by Play'n Go doesn't actually have anything to do with the numerous Halloween slots released in the past around Autumn. It's actually a heavy metal slot based on the German rock band Helloween from the 1980's and 1990's and I must confess I still have numerous albums by them, including Keeper of The Seven Keys, around which this game is based. I probably don't need to tell you the appearance and soundtrack here as I'm certain you'll have played Play'n Go's metal-themed slots in the past as there's enough of them! From Sabaton slot, through Demon slot and Sweden's own House of Doom slot we have seen many. So can we keep our bankroll here or will those 7 keys prove unobtainable?

There are 10 pay lines over 5 reels of 3 rows each on Helloween slot with single symbols. The 5-of-a-kinds pay 20x bet for the Pumpkin Wild or Gold Ring, 12.5x Keeper, 10x Demons, 8x Claw and six card values from 2.5 down to 1.5x. Orb scatters appear on reels 1,3 and 5 which also count as Wilds. That's all here, as all the action is the numerous bonus rounds!

Keeper of The Seven Keys

To get the Keeper to let you have one of his keys you need the 3 scatters on the odd reels. He will then spin his septagram and choose one of 7 free games bonuses, which are all named after tracks on the Keeper of The Seven Keys double album. They all award 5 spins except the Helloween Spins.
I'm Alive - Wilds are held and expand one row up or down each spin and disappear after 3 rows high.
Future World - Wilds expand to fill the reel.
Eagle Fly Free - one Wild flies onto the grid each spin, and the collected Wilds move around before the next.
Dr. Stein - a random card value is chosen and this becomes Wild each spin after landing on the reels.
March of Time - each Wild becomes a Walking Wild moving one reel leftwards each spin.
I Want Out - any Wilds landing explode to form 2x2 block Wilds.
Helloween Spins - you get 7 of these and need to collect Wild Orb scatters to retrigger another 7 spins.
After every free games bonus, you will be awarded a random Helloween Multiplier on your winnings, 1, 2, 3, 5 or 10x and Play'n Go tell us 5,000x is feasible here.

I'm totally biased about Helloween slot as I love this album and this live version of it is brilliant so I must try not to overlook the game itself! Your RTP is the nowadays usual factory 96.20% PnG give to most of their slots but can vary down according to your casino. The music and graphics I am of course going to give a massive thumbs-up to but the animations are good as well. The line pays are quite low for a 10-line slot and the feature is frequent enough but for the aforementioned reason you are relying on a good Helloween multiplier after the feature, which it doesn't always award as it can give nothing at all out. My musical tastes aside, there's a lot going on here on Helloween slot so I say go see how many of the seven keys you can collect...