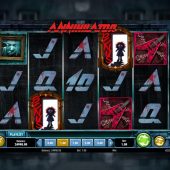 Annihilator slot by Play'n Go resorts to their favourite theme of late, the dark and Gothic Heavy Metal music scene, in this instance provided by the Canadian Thrash Metal band Annihilator founded in 1984. We open the game to a screeching guitar riff and gruff vocals with translucent reels covering a creepy looking mansion at dusk to set the scene. In fairness to Play'n Go they've made several decent metal-themed games, my favourite being Demon slot but that is down to your particular taste as Sabaton slot is a little heavier than that with Black Mamba slot adding some female vocals into the genre. The obvious question here is will our bankroll get heavier as we play, or face annihilation?

There are 10 fixed pay lines only paying left-to-right on this feature-packed Annihilator slot. Symbols are single with the Guitarist Wild paying 40x bet for 5-of-a-kind, Purple Statue 30x, Guitar 25x, Broken Picture 20x with 5 card values from 5x down to 2x for a full line. You have 2 different scatters here, the Red Devil and Zombie Doll which have their own rewards but first we'll see the random modifier which is the most frequent of them.

On a random basis during any spin, the grid may be surrounded by fire and at least one Wild will land and expand. Should there be no win, you will get re-spins until you do and any further Wilds landing during these will also expand.

Get 3 Zombie Dolls on reels 2,3 and 4 to trigger a visit to the dark hallway of this Gothic mansion. You will find a load of Zombie Dolls hanging in various places around the hall and it's a simple pick-me with values of 1 to 25x under each, a game over or a Red Devil which will collect your prizes then take you to the Set The World on Fire free games.

Set The World on Fire

You can trigger this via the Fun Palace feature as described above or land the 3 Red Devil scatters on reels 1,3 and 5. You get 8 free spins initially and are guaranteed one stacked Wild on the grid which remains throughout and moves to a different reel each spin. It will leave 2-4 Fire Trail symbols in its wake each time which can be 1 or 3 rows high and if a Wild lands in any one of these Fire Trail positions it will turn the whole trail Wild for that spin. Any scatter appearing will add 2 more spins up to a maximum of 50 allowed. Play'n Go tell us 5,000x is possible here which mean you'll presumably need many full screens of Wilds at 400x each.

Annihilator slot is certainly attention grabbing with loud music and sound effects, quite aggressive and spectacular animations with dark graphics that really do justice to the theme here. You don't seem to win much in the base game without landing the On Command Wild feature but the Fun Palace bonus is quite frequent and often triggers the Set The World on Fire spin, far more so than landing the 3 Devil scatters for a direct trigger. The free spins are quite frustrating and don't usually pay much unless the Fire Trail is fully expanded which occurs on one or maybe 2 of the spins if you're lucky but has serious potential. The RTP is 96.20% and all I can say is that fortunately you shouldn't find quick annihilation for your money here...