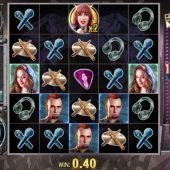 Black Mamba slot by Play'n Go is a Heavy metal based theme which this developer seems to love. We have seen some good ones from them like House Of Doom based on the music of Candlemass and more recently one based on the 1980's UK band Demon and their most notable one is probably Sabaton, a band of their fellow Swedes. This time the ladies get a look-in as it features the Italian metal band Black Mamba and we get stacks of speakers and a music store background with each member of the band taking a turn on the right to add their stuff to the game, plus of course their music as we spin. So will Black Mamba prove to have a lethal bite for our bankroll, or not?

The grid here is 5x5 with individual tiles and cluster pays so Im guessing already that Black Mamba slot will be similar in operation to games like Moon Princess. You need 3 or more symbols in a row vertically or horizontally to win and the pays for 5-of-a-kinds are 50x Martina 2x Wilds, 25x Mamba Wilds, 5x for either Fred, Cecilia or Alexandra, 3x for any of these musicians mixed, 1.5x for Cymbals or Plectrum and finally 1x for Headphones or Microphone. Winning symbols aren't replaced and after they disappear all others simply drop down their respective columns. Each winning action raises the multiplier by 1x in the base game too and Wilds can be created in the centre of 3-of-a-kind band member wins.

As you possibly expected, each band member has their own Solo modifier which can randomly activate after any losing spin.

Alexandra - 2 sets of any symbol destroyed.
Cecilia - up to 2 Wilds can appear.
Fred - one set of symbols will transform to another.
Martina - bottom row removed and may create a Martina symbol but only in Concert mode
Concert - if you get enough winning tiles, 4 to 6, of any of the band members then the meter is charged and then each solo including Martina is performed in turn.

You get 8 of these and they are played at the multiplier you had when triggering them. You need to clear the grid to trigger them and any Wilds left on their own will remove themselves to help you if they're all that's left in view.
Martina will do her bottom row removal every spin and the band member you had in play when they were triggered will also do their Solo each spin. You can also activate Concert during the free spins and clearing the grid will pay an extra 50x bet bonus each time it occurs. You get 4 extra spins for charging the meter with 6 band members or 2 extra for 4-5. Play'n Go tell us 5,000x bet is possible here.

Black Mamba slot is quite fun to play and the music is quite good, even if you don't know this band at all, like I didn't at the start. It's therefore not juvenile like the equivalent games can be such as Moon Princess. There's always some action going on with regular modifiers and Concert modes although the free games are hard to trigger sometimes, but they do have big potential. The RTP is 96.45% and I can say for sure the game won't get it's fangs into your money as quick as you might believe...