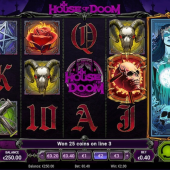 House of Doom slot from Play’n Go is an interesting mix of horror and heavy metal. In what is believed to be a first of its kind, Scandinavian rock band CandleMass have actually created and released an actual ‘House of Doom’ track to accompany this slot game. Dark and eerie reels combined with specially created heavy metal music - this game had a following before its official release. We have seen rock music tie ups before with NetEnt's Guns 'N' Roses and Motorhead games, but House of Doom is not focused on the band, rather the genre. So will the rock gods look favourably on our balance or will it end up being flattened in the mosh pit?

The theme of this 5 reel, 3 row, 10 payline slot is unmistakable, with a darkened set of reels showcasing skulls, barbed wire crosses, flaming roses, rams skulls and pentagrams. Making up the remaining symbols are the A-K-Q-J-10, which are the lower paying symbols. Top paying of the standard symbols in the Ram Skull, delivering a tasty 70x for 5-of-a-kind (5OAK). The Seer is the Wild symbol and it will reward you 100x for 5OAK. The Wild will replace all symbols except the bonus scatter.

On each and every spin, 1 or the reels will be highlighted with a thin orange outline. Should you land a Wild in this highlighted reel then it will expand covering all 3 positions.

Land 3 skulls simultaneously in reels 2, 3 and 4 and you will trigger the Skulls of Abyss bonus feature. You pick skulls to reveal prizes, one of which can be the Doom free spins. The cash prizes will top out at 20x your bet.

I really like House of Doom slot for several reasons. I am really impressed with how the developer has teamed up with the Scandinavian Rock Band Candlemass to launch game and music track together. I also like the game, which has a very original theme, some great winning possibilities with up to 2500x your stake achievable in a single spin. The RTP is a pretty reasonable 96.11%, fairly tyical for this developer. Be warned though, this slot is medium to high in volatility and you will find that you can go on long runs without wins, just as you can in similar slots such as Thunderkick’s The Falcon Huntress and White Rabbit from BTG. I will definitely be making a return to this House of Doom, regardless of the horrors that exist within…