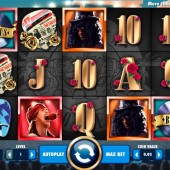 Two words summed up the launch of Guns N’ Roses slot in January 2016 – ‘Huge Anticipation’. It all started in February 2015 at the International Casino Expo in London, where NetEnt CEO Per Eriksson announced to the world that they were going to launch a Guns N’ Roses slot. What followed were several articles in the main stream music press and across numerous gaming sites about the official launch date and what we could expect from the rock band-themed slot. Notwithstanding that the band, who had split up many years previously, were planning to get back together for a reunion tour.

Online casinos were falling over themselves to come up with promotions for this huge launch, with signed guitars, trips to LA to meet members of the band and countless numbers of free spins given away. So was it all worth it?... Keep reading and you will find out.

From what I can make out, the 5 reel, 20 payline Guns N’ Roses slot has been designed in a way to focus on the bands early career, with lots of references to the band’s debut album Appetite for Destruction. However, there are some symbols, such as the plectrums, that feature other Guns N' Roses music such as their second album Lies and their 1991 album Use Your Illusion II. Band members Axl Rose, Slash and bass player Duff McKagan are also featured on the reels. One very cool feature of this slot is having a playlist of Guns N’ Roses tracks in the background, although it is limited to 5 tracks. In amongst all the references to the rock band are the usual 10,J,Q and K symbols.

As with another recent NetEnt slot – Koi Princess, there are quite a few bonus features in Guns N’ Roses. The easiest way for me to describe them is to simply list them below with a short explanation.

Land the bonus symbol on reels 1, 3 and 5 simultaneously and you will trigger the bonus wheel. Spin to win one of 3 bonus features; Encore free spins, the Crowd Pleaser bonus game and coin wins

Encore free spins – You are awarded 10 free spins with one of the band member symbols (eg Slash) acting as a Stacked Wild when any Wilds appear on reels 2, 3 and 4.

The Crowd Pleaser bonus game – This is a classic pick’em bonus, where you select up to 3 musical instrument symbols with extra picks and free spins available. If you pass certain levels in the Crowd Meter then you will instantly gain 3 more picks.

Appetite for Destruction Wilds – This symbol appears randomly on reel 3 only and will expand to form the shape of a cross creating more winning possibilities.

Legend Spins – This randomly activated feature gives you 3 re-spins with Axel appearing on reel 3 on the first re-spin, Duff McKagan on reels 1 and 5 on the second spin and Slash appearing on reels 2 and 4 on the third spin. The band member symbols are all wild and stacked over the 3 positions on the reel they appear on.

Wild symbol – The Guns N’ Roses wild symbol appears randomly on all reels and will expand across all 3 positions on the reel apart from on reel 3 in the Appetite Destruction Wild.

With so many different bonus features there is a tendency for them to be fairly low paying. Don’t be surprised if you don’t win much more than 30x – 50x, with many wins coming in at a poultry 5x – 10x your stake.

As mentioned at the start of this review, Guns N’ Roses slot is one of the most highly anticipated slots in the last 5 years. So has it lived up to the hype? That all depends on what type of slot player you are. If you like lots of action, lots of noise, superb graphics and more bonuses then you can count, then you are going to love it. If however you don’t really need a light show and explosion noises coming out of your speakers over a 5x win, then it might not quite live up to your expectations. As I tend to lean more towards the latter I tend to feel that it hasn’t quite met my expectations and I am a little disappointed that it is a low volatility slot. What is pleasing to see is Guns N’ Roses does have a 96.98% TRTP (Theoretical return to player), meaning players should in theory get plenty of playing time for their money. Whether they get any notable wins from that is not so clear.