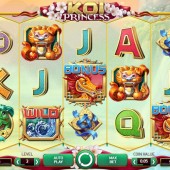 Fans of Japanese Manga and Anime need to form an orderly queue as slot game developers NetEnt have released a video slot in celebration of this hugely popular art form. It features a cute girl with long legs, wide eyes and stockings – presumably to appeal to certain fans. She stands next to the reels making a variety of noises that mainly indicate her pleasure at you winning from time to time. Koi Princess comes with no less than 8 different bonus features, which vary from mundane to quite rewarding. It also offers an option to increase your chances of hitting the bonus features by doubling your stake – more about that later.

The Koi Princess is represented on the reels and is one of the highest paying symbols, only bettered by the Wild. There are also dragons (bonus symbol), frogs and coins, all beautifully animated. They are accompanied by the usual array for K-Q-J-10 in all other positions across the 5 reels.

Take the bonus bet or not?

As previously mentioned, Koi Princess comes with a ‘Bonus bet’ option, something very reminiscent of some old Cryptologic slots such as DC Comic-inspired Green Lantern. If you are unfamiliar with such a feature then here is how it works. By clicking the bonus bet you effectively double your stake, so you are instantly betting higher limits. The payoff is you increase the bonus frequency from 1.66% (1 in 60 spins approx.) to 4.29% (1 in 23 spins approx.) It is worth noting that this makes a tiny fraction of a difference to the TRTP (theoretical return to player), increasing it to 96.23% from 96%. My advice here is simple – only do it if you only enjoy playing slots for the bonus features and that you are COMFORTABLE playing at an increased stake limit. Otherwise ignore it, as it will make little difference to how much you win or lose.

Bonus features in order of preference

By landing 3 bonus dragon symbols on reels 1, 3 and 5 at the same time you will trigger the bonus features in Koi Princess. You will be rewarded with one of these features in return:

Sure Win Free Spins – By far the most promising of all the bonus features in my opinion, as you are guaranteed a win on each spin in theory. Early success in this feature is key, as a big win in your first few spins will be matched for every remaining spin after it. Sure Win Free Spins will give you 10 free spins initially, with the option of picking up extra spins within the feature.

Wild Reels Free Spins – Very similar to Sure Wins, but instead of the guaranteed wins you get guaranteed Wild reels. Sounds good in principle, but generally you will find that the Wild reels are normally limited to 2.

Bonus Wheel - A classic bonus wheel feature where you spin the dice and work your way into the middle for bigger rewards. If you can avoid the collect squares then this feature can build up nicely with the promise of 25x if you reach the middle – good luck with that!

Coin Wins – As simple as it gets, a coin reward of between 15x and 30x instantly credited.

Something of annoyance is the 'near miss' tease that occurs when a bonus symbol is just one position out on the reels. The little fish, which features in other parts of the game, makes an attempt to flip the symbol into view for you. The problem is this fish generally makes a mess of it and you end up with nothing more than a nasty tease. On the odd occasion the fish does flip it into position and you will get a feature.

As well as the main bonus features there are some randomly triggered Pick’em bonus features, where 3 fish appear and you choose one. You will be win one of the following:

5 Hit Feature – Spin the wheel to choose your chosen symbol. This will be placed on each reel by the fish with a guaranteed 5-of-a-kind win. You may also benefit from other symbols around matching your chosen symbol, making more winning lines.

Wild Reels – You get one re-spin with between 2 – 5 reels turned Wild by the fish. Great if you get all 5 reels Wild, but generally you will get 2 or 3.

Random Wilds – This feature will see the fish flip between 4 – 9 extra Wilds onto the reels for one re-spin.

Having played this game for several hours I can tell you that there is some good and bad that comes with Koi Princess. The animation is really impressive and the soft pastels used mean that you don’t end up with sore eyes after long periods of play. The number of features is staggering and makes the game very exciting initially, however this novelty soon wears off. With so many features this slot High volatility players will lose interest quite quickly and they are better off sticking to Dead or Alive (the only high volatility slot that comes to mind from NetEnt).