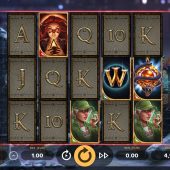 Arcane Reel Chaos slot by Netent will possibly bring you fond memories of their classic South Park or South Park Reel Chaos games, sadly discontinued. If you see any casino with those games by the way, they're from fake pirated software so avoid at all costs! Here we have a replacement for the latter with an arcane theme as the title tells us and it looks pretty good, with sinister tarot card reels over a dilapidated stained glass church with nice creepy music to set the scene here. The game definitely gets its visual influence from Netent's excellent Blood Suckers 2 slot so let's hope it isn't a bankroll-sucker too.

There are 20 fixed pay lines here on Arcane Reel Chaos slot with single symbols of which the card values are plain and the rest have some dark characters on. The reels are the usual 5 of 3 rows apiece with 5-of-a-kind pays of 50x bet for Deep Pockets, 25x Flare, 15x Zero X, Chrono 10x and Psyop 7.5x with five card values from 5x down to 2.5x for a full line. Wilds can appear on any reel too and presumable pay the top character if you ever see five of those. There are scatters in the form of a Pendant with an Asp coiled around it but there are far more to the dark secrets here than simply triggering the bonus.

Psyop's Stacked Wilds - basically any 2 or 3 reels will turn into full stacked Wilds.

Zero X's Overlay Wilds - randomly on any spin, 3 to 5 Wilds placed on the reels.

Flare's Multipliers - after any win, this awards a 3,4 or 5x multiplier.

Chrono's Respin - after a no-win spin, respins occur until a win appears. Each time it doesn't, the multiplier increases beginning at 2x to a maximum of 10x.

If you see the Pendant scatters on reels 1,3 and 5 you begin a battle of spins feature. There are 4 possible stages where the 4 heroes above fight the enemy, Deep Pockets. He starts with 2 health points and a 1x multiplier in stage 1, 4 points and 2x in stage 2, 5 points and 3x in stage 3 and finally 6 points and 4x in the last stage 4. There are only the 4 hero characters on the reels and every win will shoot away Deep Pockets' health by 1, but every losing one ticks one of the 6 health bars you begin with. When the Boss is beaten you move up to the next level and get rewarded with an extra health bar and your multiplier increases as described. You also get a small prize when beating the Boss on any level. The free spins continue until you lose all your health and if you do beat the Boss in the final stage 4 you will also get 10x bet as a bonus for every health bar you had left. Great fun!

Arcane Reel Chaos slot is visually great and the animations and sequences in the free games and modifiers pretty fantastic. It continues the improvement shown by Netent in recent times which began with Dead or Alive 2 after many releases in the preceding couple of years of which many were dross. The RTP is very good at 96.81% and I love the soundtrack and music too, although without modifiers the base game can be a little low in volatility and the free games despite being great to watch can be a little on the stingy side. That said, I enjoyed my arcane period here despite the chaos of the battle...