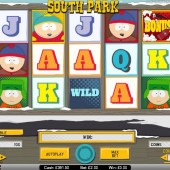 “Oh my God! They killed Kenny! You [insert insult here]!”

Finally, after years of slots players demanding to see the four little terrors from South Park make a transition to the online slots world, fans of the show can now revel in Cartman, Kenny, Kyle, Stan and their host of friends and family from their small town in a slot game.

In what has proved to be one of the most hotly anticipated slot releases in recent memory, Scandinavian-based online slot developer NetEnt can now sit back and watch the mayhem ensue from this slot’s release into the world.

South Park is a 5- reel, 25-payline online video slot that delivers everything a fan of the hit US television show could dream of… and more!

All of the character faves are there like Stan, Kenny, Cartman and Kyle. Even Ike and Mr Hankey the Christmas Poo make cameo appearances in the bonus features.

NetEnt have not missed a trick here and this game well and truly brings it all to the table.

There are four initial bonus features with each bonus based on one of the four main characters in the series. These are triggered when you hit the respective character’s bonus symbol on the 5th reel.

The Cartman Bonus will allow you to take control of Cartman and wander around the streets of South Park in an effort to hunt down hippies and spray them with a fire extinguisher.

You will be presented with 8 bushes with some concealing hippies. If you find a hippy and spray them then they will reveal a prize and multiplier value. You must avoid being rumbled by the local policeman. If he busts you then your bonus feature will end.

The Kyle Bonus is a feature that gives you the chance to win 10 free spins that you are awarded upon triggering the feature. In this bonus feature, Kyle’s brother Ike appears on the reels. He will then drop down the reels and land on a hopscotch grid that is located at the bottom of the reels. Kyle will then kick Ike and you will be awarded a prize depending on what square Ike lands on.

In this bonus feature, you can win 3 extra free spins, a multiplier value up to 10x or extra coins.

In the Stan Bonus, it is all about the re-spins. A Sticky Wild will appear on the central reel and you will be awarded with two re-spins.

Additional Sticky Wilds can appear during the two re-spins rewarding you with more re-spins.

Finally, there is also the Kenny Bonus and this is probably the most enjoyable bonus of the four.

In this feature, you simply have to guide Kenny around the streets of South Park and save him from being killed.

Every time you prevent Kenny’s death you will win a prize. Beware! These aren’t every day hazards you will have to deal with so have your wits about you!

NetEnt have gone that little bit further with South Park and have also included three mini-bonus features that add a little bit of spice to proceedings. These are all randomly triggered during regular game play.

Bag a Mini-Feature For Extra Prizes

If that's not enough, there is the Mr Hankey Mini Feature that consisting of the singing faeces randomly appearing on the reels, bouncing along the reels and randomly turning symbols Wild.

The Terrence and Phillip Mini Feature involves the potty-mouthed fictional Canadian celebrity duo popping up on the reels and will turn symbols Wild on Reels 2, 3 and 4.

The Cartman Mini Feature, meanwhile, features a 3x3 grid of Cartman Wild symbols which appear on the central reels. These can really increase your chances of completing winning combinations.

South Park is one hell of a slot. It has the slick graphics and superb gameplay that you'll find in NetEnt slots such as the intriguing Magic Portals and the really enjoyable Jack Hammer 2 but it also offers the bonus features of a Playtech Marvel slot like The Avengers slot.

You might have to work for the big wins but you will love the game play so much that you won’t mind too much! The only downside is - and we're just nitpicking here - where the hell is Chef?!