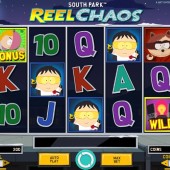 Finally, it's here! The most hotly anticipated online slot release of the Autumn has arrived in the form of the sequel to the original South Park slot... South Park – Reel Chaos!

South Park – Reel Chaos is a 5 reel, 20 payline sequel to the first South Park slot released by Scandinavian-based online slots developer NetEnt. Not since Microgaming's release of Jurassic Park back in the summer of 2014 has a slot drawn so much excitement and hype.

This second outing for Cartman, Stan, Kyle and Kenny sees them battle against Professor Chaos and his cronies to keep South Park safe and sound alongside trying to help win you pay outs and cash prizes along the way.

Symbols on the reels are made up of the four foul-mouthed friends who have donned their coolest superhero outfits in an effort to battle Professor Chaos, who also appears on the reels. There is also the regular 10-through-to-Ace symbols on the reels that are set against a back drop of South Park itself.

There are four mini-features available to trigger on this slot, each mini-feature based on one of the four heroic friends. The Cartman Stacked Wilds feature will see Cartman hunting for General Disarray and he will climb up and down the reels on spins turning 2-3 symbols into Stacked Wilds. He doesn't half move quick for a fat ass!

Stan Delivers up to a 10x Multiplier

The Stan Multiplying Re-Spin feature will see Stan use his newly-acquired mental powers to fix the broken reels with power tools. These repairs will see all five reels re-spin until you hit a winning combination. A multiplier up to 10x will also be added to your win and the value of the multiplier depends on how many non-winning spins you go through before you hit a winning combination. The multiplier will increase every time you hit a non-winning spin. Good things come to those that wait!

There is also a Kyle Overlay Wilds feature where Kyle uses his laser beams to destroy Professor Chaos' cronies. This will create up to 5 overlaying Wilds that will appear on the reels and give you the chance to earn some big wins from winning combinations.

Oh My God! Win a 5x Multiplier with Kenny!
Finally, there is the Kenny Multiplier feature. Kenny might have a reputation for dying repeatedly but in this feature he becomes the ultimate hero as he goes mono a mono with Professor Chaos to save South Park and earn you up to a 5x multiplier. What a legend!

Our View...
The original South Park slot by NetEnt was a solid enough slot and I am glad they did a second one. However, this latest release is a much better all round slot than its predecessor. The combination of the Mintberry Crunch Epic Bonus Spins feature and the four mini-features ensures there is plenty to keep you on your toes and the wins are always just around the corner. Could the wins be bigger? Possibly. That is just picking at flaws though. I will be playing this slot for a while and even though non-fans of the show might be a bit confused by its randomness (there's a half man, half berry character for Christ's sake!) it is worth putting the realism to one side and just enjoying a fun slot.