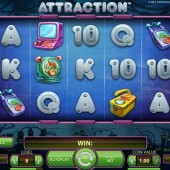 Ah, the fresh sound as you load up a new slot release from the Scandinavian masterminds at NetEnt. The wonderful graphics, the slick feel of the reels spinning, and the music that is a lifetime away from the cheap sounds offered by certain other developers.

Is the Attraction There?

Attraction is a 5-reel, 10-payline slot that is another faithful release off the NetEnt production line. Let's be honest, with NetEnt slots, you know what you're getting. They divide opinion. Some love them, some hate them. Personally, I am a fan... usually. However, I'm not too sure on this electromagnetic-themed slot so far.

The reels are set against a science lab where electromagnetic experiments appear to take place. Symbols on the reel consist of various electromagnetic apparatus including a computer, Geiger counter, handheld radar, electricity meter, and a Wild symbol that is represented by an isotope symbol.

This slot is all about the electromagnetic energy. On each spin, a magnet will appear either on the side of the reels or on the top of the reels.

If a Wild isotope symbol appears in line with the magnet then the magnet will zap the Wild with an electromagnetic pulse and the Wild will expand across the symbols placed between its original position and the location of the magnetic.

You will then be given one free re-spin to see what winning combinations you can hit with the Sticky Wilds that are in place. If you hit more Wilds on the re-spin then you will receive an additional re-spin until no extra Sticky Wilds appear on the reels on a re-spin.

Attraction is a neat little idea of a slot. There is no free spins bonus round and there is also no sign of a bonus feature. That said, the fact that the Wilds are so important and appear so frequently means that every spin offers an opportunity.

It's unlikely you will win any big jackpots, with the maximum jackpot being 50,000 coins on this slot, but for small wins here and there with the potential for action on every spin, it's a great slot to play to kill a bit of time.

If you opened this expecting it to be the next big release from NetEnt similar to the hilarious South Park slot or the massive blockbuster Aliens slot then you will be greatly disappointed. This feels more like a tide-me-over slot to keep us busy as they set about developing their next big hit. Provided you know the score, you could well get some enjoyment out of it.