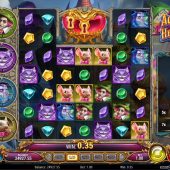 Agent of Hearts slot by Play'n Go joins an illustrious group of games using the Alice in Wonderland theme. We have the floating kingdom as our background with the expected symbols of the story along with some good sounds and voice effects as we play. Big Time Gaming's White Rabbit slot is one you must have seen in this genre or if not Play'n Go's very own Court of Hearts slot. WMS have had a not-so good game called The Cheshire Cat slot but there are a few others in land based casinos you may have seen. Can this agent help our bankroll through Wonderland or will the greedy queen take it from us?

On the grid...
You have a grid here of 7 columns of which the outside 4 are 7-rows and the inner 3 5-rows so have 43 tiles on Agent of Hearts slot. You need 5+ matching symbols in adjacent positions to win and winners are replaced in tumbles. The pay levels range from lowest for 5 tiles to highest at 15+ clusters. So your awards are 1000/2.5 Mad Hatter, 125/1.25x Cheshire Cat, 50/0.75x Caterpillar, 40/0.5x Dormouse with 4 coloured gems at 20/0.25x down to 5/0.1x for the high/low extremes. Wilds can occur in the form of a Heart in any position and in keeping with Play'n Go's cluster pay grid slots, we get modifiers. Your scatter is a Key which can also land anywhere.

Agent Modifiers
On any spin, 4-7 Random Wilds can be added to any positions. You might also see the White Rabbit appear and trigger one of the 4 cumulative Agent modifiers which are usually unlocked by collecting 6+ of their symbol in any play.
Cupcake Splat - 6+ Dormouse required, he runs across the grid leaving a trail of Cupcake Bombs which remove or transform symbols underneath.
Smokin' Phat - 6+ Caterpillars will blow diagonal smoke trails across the grid doing the same as above.
Grinning Cat - 6+ Cheshire cat symbols means he appears on the grid, grins which then enlarging him doing the same as above to all symbols underneath.
Mad Hat - 6+ Hatter symbols mean he throws 6-9 hats onto the grid which remove symbols around them and transform those underneath.

Queen's Heart
This is what you need to collect 3 Keys to unlock. Where the centre 3 reels are 2 rows shorted than the outer 4 reels, you have a 3x2 space with the Queen's Heart inside it. The 3 keys collected will unlock her heart and award 1 spins with all 4 Agent modifiers played out, finishing with a Queen's Heart Mega Wild! Apparently up to 5262.5x bet is the maximum which can be won, I bet you would never see a third of that!

Our View...
Agent of Hearts slot has a default RTP of 96.20% but it can be as low as 84.20% so always check the casino help files! The game really looks and sounds nice whilst running smoothly. You won't win much here without the Queen's Heart being activated which can take a long time to do, for often a disappointing result. When it does pay, it really pays so if you can sweat it out long enough you could do well here. The Agent modifiers occur often enough as do the random triggers of them and the random Wilds feature which are where you base game hits tend to come from. I can't say this agent has stolen my heart but I could well be tempted back by those cupcakes...