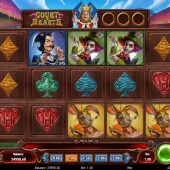 Court of Hearts slot by Play'n Go returns us to medieval times albeit in a cartoon form. There's a touch of BTG's White Rabbit slot here combined with Ash Gaming's old Alice’s Wonderland slot but be aware that this game seems to be related to a previous Play'n Go release, Rabbit Hole Riches slot. We have an outdoor feasting scene here in the lush countryside although much of it it hidden behind the reels and offe3rs only glimpses while you play, with medieval cartoon music and zany sound effects to complete the look. So can we add some hearty wins to our bankroll here or will playing this mean courting with disaster?

There are 10 pay lines over a 5x3 grid here with individual cascading tiles so the symbols can end up stacked on Court of Hearts slot. Winning tiles are removed but there's no increasing multiplier or anything in the base game, although the Rabbit Hole symbol landing will offer up one of 3 modifiers. Pocket Watch scatters can appear on any reel as can Gem Wilds but more Wilds can be had via the modifiers. The Queen of Hearts and Wild is top 5-of-a-kind pay at 20x bet, King is 8x, Knave 6x, Rabbit 4x with four card suits paying 1.2 down to 1x for any full line of five.

The Rabbit Hole randomly landing will reveal a Wilds modifier for your spin:
Cheshire Cat - full reel Wild will be added to a random reel, and it will move about with each winning cascade, not disappearing with other symbols.
Caterpillar - adds 3 to 7 randomly placed Wilds.
Dormouse - adds a growing Mega Wild to the grid, which can offer 2x2 up to a maximum of 4 full reels of 3 rows!
White Rabbit - not a Rabbit Hole modifier as the above three, but as a spin starts can randomly adds 2 scatters to the grid and increases chances of the free games trigger.

You will get 9 free spins initially for collecting 3 Pocket Watch scatters in any spin. You get the Megaways-style increasing multiplier for every winning line here so multiple rises per winning spin possible and not only that, the random Rabbit Hole Wild modifiers can still appear. TO make the round even more attractive, the top-paying Queen of Hearts symbol is now a Wild too! No extra spins or retriggers but we are told up to 8,500x bet is possible here.

Court of Hearts slot is quite volatile but I must say a whole lot of fun. You can land some decent wins on this 96.25% RTP slot via the Rabbit Hole Wild modifiers and the game is nice enough to watch and listen to. Your free games are quite hard to trigger compared to many Play'n Go slots but have great potential as despite only 9 spins, numerous multipliers are added due to each line pay adding 1x. Land the Dormouse Wild modifier on a good multiplier and you will see very nice wins usually. I say it's time to go courting with the Queen of Hearts...