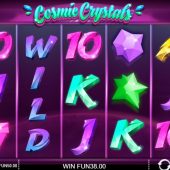 Cosmic Crystals slot is a 50 payline 3-row and 5-reels game from 1X2gaming. It is another game that uses the futuristic neon symbols on a black background akin to Netent's Starburst and iSoftbet's Wisps slot.

There are card symbols from 10 to Ace and these can appear in stacks of 2, plus different colour stars which award 20x stake for the best 5-of-a-kind Yellow Stars, right down to 0.6x stake for 5 10's. The game is pretty basic with no actual scatters to award a feature of any description, but there are expanding non-multiplying Wilds on the centre 3 reels.

OK, here is where we reveal Cosmic Crystals slot's specialty - it is the first game I've seen that guarantees a win on every spin! Yes, should you not get a winning line, the reels re-spin until you do on each and every credit! Obviously many wins will be under your stake value but often an expanding Wild can appear on reel 2, 3 or 4 and should no win occur these will be held in place for the re-spin. I found this is where the bigger wins tend to occur. Should you be fortunate enough to land 3 Wild reels with a Yellow Star on the same row either end then this will pay several hundred times your bet!

It's good to see new ideas being introduced by developers and 'every spin a win!' is something we haven't encountered before. Cosmic Crystals slot's variance is obviously affected by this set-up so it may not appeal to the chasers of colossal wins, but is quite entertaining and has a pleasant musical soundtrack too. I can see this game being added to many casinos' list of prohibited games when using a bonus.