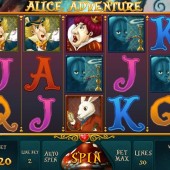 Pioneering slots developer iSoftBet have been busy of late, with a raft of new slots hitting casinos everywhere. Their latest - Alice Adventure - doesn’t exactly follow a new theme, but it's great fun all the same. Based on the classic Lewis Carroll book, Alice in Wonderland, Alice Adventure doesn't hold back in laying on the colour and gold trim as we are transported straight down the rabbit hole into a world of Queens of Hearts, March Hares and Mad Hatters.

Is This Anime Alice?

The graphics are fairly Manga-esque in feel, with big eyes and small features making the characters look like they've stepped out of Alice in Wonderland: The Studio Ghibli Remake. This might not be something that will appeal to everyone but for the generation of 1990s kids that are coming of age and grew up with Pokemon it will add a sense of nostalgia.

The symbols on the reels include the Mad Hatter, the Queen, hare and caterpillar making up the numbers. The ones to avoid are the paltry-paying Jack-to-Ace icons. Look out for the Alice icons. They act Wild and substitute for all symbols other than the Scatters. On top of that, they carry various multipliers (2x-5x) which can boost your cash wins. Five Wilds on a payline awards a nice 1,000-coin jackpot.

Drink Up for 15 Free Spins

Three or more Drink Me bottle Scatters triggers the Alice Bonus, where you can win anything from 5 to 15 free spins. The bonus can be re-triggered, and during the round bonus Scatters will stack up and reactivate after the round is over.

There's a neat little bonus with the Wilds during the free spins too. Hit the Wild Reel icon and the entire reel will turn Wild, remaining in place for the duration of the bonus round.

It's the Wild multipliers which really make this slot worthwhile. I managed to hit 5x on my Wild wins plenty of times during the base game, but with some fairly low maximum bets you have to hit them a lot to make the wins worthwhile. There seems to have been a little spurt of Alice slots of late, so make a dash (don't be late) for a casino offering WMS Gaming's Alice and the Mad Tea Party or Alice's Wonderland by Ash Gaming; both games are pretty decent efforts in the fairytale slots stakes.