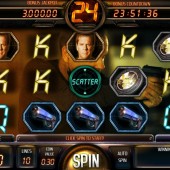 It was a television series that completely revolutionized the genre as we know it. Kiefer Sutherland's Counter Terrorism Unit (CTU) agent Jack Bauer became a household name when 24 hit the airwaves and has gone down as one of the most exhilarating television shows in the history of US television. It set the standard for shock deaths, stunning storylines, and an air of paranoia that could not be matched anywhere else.

24 - The Longest Spin of Your Life

Innovative slots developers iSoftBet have latched onto the commercial success of 24 and launched this 5 reel, 10 payline branded slot based on the show and the spin-off movie it spawned. Fans of the show will immediately feel familiar with the surroundings as the 24 logo and Jack Bauer's sorrowful face pop up on screen along with cut scenes from the franchise.

The symbols present on the reels include Jack Bauer himself, a CTU logo, a handgun, and the regular Jack-through-to-Ace symbols with the letters displayed on the reels in a similar font to that of the 24 clock that ticks throughout each episode. There is also a Scatter symbol that can pay out some decent-sized wins.

The Wild symbol is represented by the 24 clock itself. This substitutes for all other symbols that appear on the reels, except for the game's Scatters, to complete any potential winning combinations. This slot also comes with Sticky Wilds. These can appear on reels 2, 3, and 4. When they do appear, they have the power to transform up to 3 random symbols into Sticky Wilds whilst also triggering 1 free spin.

The Clock is Ticking!

There is a bonus feature on this 24 slot and in true 24 style, it is triggered not by symbols on the reels but by a 24 hour clock that begins ticking down from the time of 23:59:00 until it reaches zero. The clock will tick down on every spin you play. Once the timer reaches 00:00:00 you will be taken to a second screen where you must shoot as many terrorists as possible to try and win some huge pay outs. When you shoot a terrorist their silhouette will change to a random colour. Match three types of the same colour to win a bonus prize.

24 is one of the branded slots that I was desperate to see happen. I loved the television series and when I saw iSoftBet were getting behind it I was really pleased. Unfortunately, despite seemingly having all the licensing required thanks to a deal with Twentieth Century Fox Film Corporation, this slot is left wanting. It feels like it has that same anti-climax feeling that Game of Thrones by Microgaming gave me. It's a great brand and there is so much potential for a slot with all the characters and plots the show has delivered but it falls short. We don't see any characters other than Bauer, we don't have any bonus features that tie in with any of the show's storylines, and the slot relies on Sticky Wilds and an infrequently-triggered bonus feature for its wow factor. Not a bad slot by any stretch of the imagination but this could have been so much better.