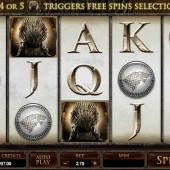 Finally, Winter has come! The most hyped slots release since Dark Knight slot has had slots fans and Game of Thrones fans bouncing off the walls for the entirety of 2014 but at last, the day has arrived that the official Game of Thrones slot from Microgaming hits the online market.

Game of Thrones is inspired by the hit HBO television series that is based on the Song of Ice and Fire books written by George R.R. Martin. The series has gone on to become one of the most successful television series in recent history with the debut series being nominated for a staggering 13 Emmy Awards.

The show tells the story about the fictional continents of Westeros and Essos where several noble houses begin a civil war to claim their right to the Iron Throne that is left vacant when King Robert Baratheon is murdered. The story then evolves to introduce more houses, mythical creatures and rivals for the throne.

The slot is a 5 reel slot with the option to play 15 paylines or 243 ways-to-win. The atmospheric soundtrack that fans will recognise from the show by composer Ramin Djawadi fills the air. The reels are packed full of symbols relating to the television series including the house emblems for House Stark, House Lannister, House Baratheon, and House Targaryen. There is also the regular Jack-through-to-Ace symbols present on the reels.

The Wild is represented by the Game of Thrones logo. This can help to complete winning combinations across the reels by substituting for all other symbols except for the Iron Throne Scatters. These Wilds can also appeared Stacked on the reels.

The main bonus feature on this slot is the free spins bonus round. This is triggered when you hit three or more of the Iron Throne Scatters across the reels. Once triggered, you will be taken to a second screen where you must choose one of the Houses and their free spins options.

Which House Will You Choose?

Win Big with the Scatters

The Scatters also offer a sweet little consolation prize if you fall just short of triggering the free spins bonus round. Two Scatters will dish out a lovely pay out that is a cash prize multiplied by your bet value. You also get to see a cool little dynamic in the symbols that trigger the pay out.

Gamble Your Fate Against the White Walkers
For once in a slot, the Gamble Feature is slightly different. You are taken to a map of Westeros where you start on a symbol representing the 3 eyed raven. If you decide to gamble you will then move on to the white walker symbol. If you guess correctly then you double your win and it triggers a movie sequence showing the terrifying white walker. Further down the line, you will encounter a dire wolf and a dragon if you decide to gamble further later on in your spins.

The free spins bonus round is pretty cool. When you trigger it, there is a movie sequence showing various scenes from the television series that fans will immediately recognise such as the Iron Throne, King's Landing, Winterfell, and Daenerys Targaryen's dragons.

This slot has received a lot of press leading up to its release. I remember being at ICE 2014 when Microgaming announced that they had secured a deal to develop the Game of Thrones slot and even back then at the start of the year the anticipation was incredible. Many were comparing the potential of the slot to be on a par with the old Lord of the Rings slot from Microgaming. However, there was caution after the doomed fate of that slot and the heavy criticism that Microgaming's Avalon II slot endured after an initial positive release.

The big question is, was it all worth the wait? Personally, I think this slot as it stands is a very solid and enjoyable release. The potential wins are there to be had and it's great to see the movie sequences from the television show included. Everybody loves (or is petrified of) a white walker right?! It's unfortunate that the characters of the show aren't included. It would have been great to have a series of bonus features based on the main characters like a Tyrion Pick'em Bonus, an Arya Free Spins Bonus, or a Joffrey interactive bonus. However, understandably, there's probably been a lot of rights issues involved in that and it was easier to just keep it to the Houses and that works fine. Is it a five star slot? It's close. It's not perfection in a slot but the look and feel of it is incredible and I will be playing it for a long while. The potential for a future release is also there and I wouldn't be surprised if the follow-up goes that little bit further and builds on the success of this debut release. Well played Microgaming! My thirst for a decent Game of Thrones slot has been satisfied.