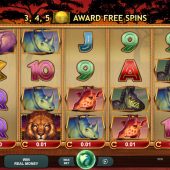 African Quest slot by Microgaming via Triple Edge Studios is a mish-mash of old ideas. It's so old and repeated I could name 100 games with the same mechanic, but we'll settle for Aristocrat's Buffalo slot which should tell many players all they need to know. If not, what about Bally's Thunderhorn? Or try Lightning Box's Silver lion? You get the African savanna behind the reels and the predictable array of animals and gentle tribal music as we spin. Can our quest for bankroll enrichment be a success here or will it end up being badly bitten?

There are 5 reels of 4 rows each and if you haven't guessed yet, 1024-ways to win on African Quest slot and Wilds appear in the form of a tree in the sunset, as with Raging Rhino etc. on the centre reels but not the outside. the 5-of-a-kind pays for the single and stacked symbols are 7.5x Lion, 3.5x Rhino or Elephant, 3x Giraffe or Zebra with six card values all paying 2.5x for a way of 5. No random features either and the Africa Scatter appears on all reels.

This game allows you to spin one reel while the others remain in place for the price displayed underneath, so if you have 2 scatters and no win for example on the first 4 reels, you can spin reel 5 or 6 and pay through the nose each time until it drops in. Don't bother, play it normally.

There is one simple difference here to the slots I mentioned in the introductory paragraph. When triggered with 3 or more Africa scatters, you can choose 3 options. These are 5 spins with Wilds awarding either 3 or 4x, 8 with 2 or 3x Wilds and 12 with 1 or 2x Wilds. Two scatters will award extra spins at 3, 5 or 6 respectively for the above options and normal retriggers apply to 3 or more scatters landing in the bonus. So there is some potential here, but I doubt you'lll see it on a Triple Edge slot ever.

Microgaming and their contracted studios are so far behind other developers now that African Quest is simply, like Book of Oz, a further representation of the fact. It's yet another game simply spliced together from the older classic mechanics of other developers. The game doesn't look or sound very good either and the RTP is alright at 96.02-96.52% but it's overall totally uninspiring. Put quite simply, why would you or I ever feel the need to play it?