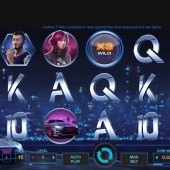 Petrol-heads and horsepower junkies unite as NetEnt has created a high octane experience in the form of Drive: Multiplier Mayhem. Set in the glistening lights of a non-descript city, where normal people are tucked up in bed and the night air is filled with the sounds of performance engines and the smell of nitro fuels. Young daredevil drivers race each other for kudos, pink slips and to prove they are the fastest driver amongst their peers. Like the Fast and Furious franchise, which racked up 7 movies and billions of dollars worldwide, there is a huge following for fast cars, high-speed racing and head to head battles of this type.

Drive Multiplier Mayhem tells a similar story and pits you, the female driver, against 3 other challengers. All four drivers can be found on the reels offering varying levels of rewards. The only other symbols on the reels are the Multiplier Wilds, Bonus Scatters and the standard A-K-J-10. Your pimped-up supercar remains in the bottom left of the screen, only moving to take you through to the bonus round.

The base game itself is fairly standard but does come with an interesting bonus feature—Multiplier Wilds, which incrementally grow with each reel. Therefore Reel 1 has a 1x Wild, reel 2 offers a 2x Wild and so on all the way to reel 5. If you get 2 or more Multipliers on a single payline then they are multiplied together. This can mean some really impressive wins if you land a few at the same time.

As well as the Multiplier Wilds, Drive Multiplier Mayhem comes with a free spins bonus feature. By landing 3 scatters on the 3 middle reels at the same time you will activate the free spins. During this feature, there is a ‘Nitro Collect Meter’ on the left of the screen. As the feature gets underway, you may start getting Nitro symbols appearing, which are then added to your collection meter. As you climb the meter you will go head to head with the other racers – Twitch, Hamaki and eventually Bruiser. Climbing all the way to the top is certainly not guaranteed, but each racer you face you will be given an extra multiplier and some extra free spins. The further you get the more chance you have of landing a big win.

Bravo to NetEnt, they have finally produced something enjoyable to play. Drive Multiplier Mayhem is a medium to high volatility slot, which offers some real rewards in the two main features in the game. The pace of the slot is good, and there is little or no titillation with constantly landing 2 scatters, but not a 3rd. It reminds me very much of the futuristic Thief slot, also from NetEnt. If you like driving games then you may also want to try Racing for Pinks from Microgaming and Play’n Go’s Gumball 3000.