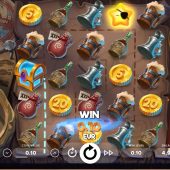 Finn's Golden Tavern slot by Netent is a beery version of the pretty dire original game Finn and the Swirly Spin which tried to be clever by having a circular aspect to the reel tiles. The theme still retains the inane noises and sill music but at least looks a bit better with the brown grid laid over a dingy beer cellar. If you like beer I suspect WMS' classic Bier Haus will be more to your taste or the Nextgen Casinomeister slot which is definitely based on a real fan of the amber nectar! So will it be drinks all round or last orders for our bankroll here?

The 5-of-a-kind pays aren't high, with 4 different drink bottles and glasses all paying 5x bet, 0.5x bet for 4 or 0.1x bet for 3. Your other 4 symbols are all Gold Coins paying 5x, 2x, 1x or 0.5x bet and these values add when they are in a winning line. You get Wild Stars created after wins, usually from the centre of a 3OAK but these have no value, simply counting as Wilds. The don't appear naturally.

We get two of these:
The Fist occurs randomly after a losing spin and will move a single coin on the grid as long as there are 2 other adjacent coins anywhere else, to create win. The game then continues as normal.
The Random Coin Feature occurs when the winning actions end and will add a couple of coins to the symbols surrounding the centre one, maybe continuing the winning lines.

There is a single Free Games Chest on every spin in position one, the bottom left and you need to get a series of wins which moves this to the centre position, whereupon 5 free games are awarded. Every time you create 5 Wild Stars via any wins, an increasing multiplier is applied which is retained throughout the feature, otherwise it's all the same as the base game works. If the Chest get to the centre here, it simply activates the Random Coin Feature.

Finn's Golden Tavern slot is no better than the low-potential and irritating original version. The interjections from the inane Irish leprechaun voice every time you get a win i.e. 'Shiver me timbers' or 'Howling hurricanes' really grated on me very quickly and the amount of dead spins is frankly ridiculous. I am trying my hardest to say something good about it but it's childish, repetitive and even the RTP at 96.10% is lower than most Netent slots. You won't win much at this pub and this is one drinking venue when visiting that you'll be hoping the doormen won't ever let you in...