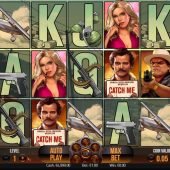 Narcos slot by Netent is a rare 243-way game for this developer who haven't released too many unlike Microgaming. We've had Alien Robots and the popular Twin Spin along with the quirky Ghost Pirates which is a shame as Netent can produce some decent ones with this mechanic. The theme here seems to be US law enforcement's constant battle with drug smuggling from Mexico, and Donald Trump's border fence doesn't seem to have reached as far as this dusty border town in the background, complete with Latin style music as we play. Our bankroll here is under threat of confiscation from both criminals and the authorities it would seem so a lucky escape may be required here.

On The Reels...
As said Narcos slot provides 243 ways to win with a 20-coin minimum stake. This means you get 5 reels of 3 rows apiece with single symbols and quite low pays. The 5-of-a-kinds are 15x for the Radio Agent or Pistol Agent, 12.5x for the Girl or Criminal, 6x Pelican or Plane with four card values of either 3 or 2x for a full way. Wilds in the form of DoJ Gold Badges appear on all reels and pay the same as the top two symbols. When any Wilds appear, they remain wandering on the screen and move 1 reel leftwards each paid spin until disappearing. You see Car Scatters on the odd reels for the bonus, but there are some other modifiers these Narcos can offer first.

Modifier Features
Drive By Wilds - randomly on any spin, one or more high-values symbols on the grid may be turned into Wilds.

Locked-Up Respins - There is another symbol which can appear, a Drug Lord holding a taunting 'CATCH ME' sign. If 3 or more appear on any row, an interesting respins round occurs. You get 3 respins with only blanks or those symbols on the reels which spin all 15 tiles individually, aside from those held. The Drug Lord displays a coin value of 1 to 10x bet and a chain encloses them on the reels and clusters them together. Any further symbols reset the 3 respins when landing adjacent to any clustered captured Drug Lords but as well as the Drug Lord you can get bonus ones. A Gold Briefcase will either multiply the displayed cash awards held thus far 2 or 3x, a big starting value is revealed or the displayed values may all increase by 1x bet. When you've filled the grid or had 3 respins with no further additions, you are paid the displayed total. It's usually a good award!

Free Games
Having landed those elusive 3 Car Scatters on 1,3 and 5 you see 10 free games. No retriggers, but on any spin there is a chance the Drive By Wilds as above are activated and of course they will also add up on the reels as the wandering Wild feature is still applied in these spins, so they move left one reel each time. A volatile bonus which either pays very well or badly. If you finish your 10 spins and there's still a wandering Wild left in view, you get extra ones until it moves off, but this means no further ones tend to land to extend this extra spins.

Our View...
Narcos slot is very inventive from Netent and comes with a decent 96.23% RTP as well as good sound effects and graphical sequences. The spread of RTP is actually mentioned in the help files and is approximately a quarter for all 4 facets, the base game, Wandering Wilds, Drug Lord respins and free games bonus although the first two are really part and parcel of the same thing. So you always have something going on here and in fact I prefer the potential of the Locked Up Respins to the actual free games. You won't ever prosper here unlike some of the drug lords in this world, but it's certainly worth a doing a bit of running of your own...