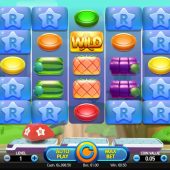 Reel Rush 2 slot by Netent is just as childish looking as the original Reel Rush game but at least we get a few extras along with our candies this time. A cartoon green valley lies behind the translucent reels and now we get a railway track under the reels too with silly bird song and bloops as we play. Netent have made some pretty poor fruit themed slots before, with the forgettable Fruit Spin and only slightly less terrible Fruit Case a couple to avoid. So will there be a rush of money for our bankroll or will this game leave us reeling?

As with the original, we get initially 45-ways to win with the reels in a 1-3-5-3-1 arrangement. Wins will remove some frozen positions successively and award a free respin. These open up more ways successively by increasing reel sizes and these are 135 ways on first respin, 405 second, 675 third, 1125 fourth and from the fifth 1875 ways. If you get another win on the fifth respin you unlock the full grid of 3125 ways and get the free games, but we'll get to those soon. You will see single Wilds on all reels bar the first and the 6-of-a-kind pays are 10x for Strawberry, 5x Pineapple, 1.5x Orange or Melon, 1x Grapes or Plum with 5 fruit discs as the low pays of 0.6 or 0.5x for a full way.

The rails underneath carry modifiers on carriages like say Egg-o-matic does:

Heart - second chance on a losing spin
Block Breaker - 2 or 4 blocks unlocked, expanding the ways
Symbol Multiplier - 5, 10, 15 or 20x symbol will multiply any line wins of that icon.
Random Wilds - 1 to 3 Wilds on the grid bar reel 1.
Symbol Upgrade - any symbol can be upgraded to next one up in pay table.
Extra Tokens - 3 to 15 tokens added to the Super Spins meter.
Multiplier Boost - progressive multiplier meter raised by 1x
Extra Free spins - in the bonus only.

You trigger these by getting enough respins to open up the grid to the full 5x5 3125 ways. This is how it remains throughout. You can get extra spins on the rails below. You will get the choice to gamble these spins for Super Free Spins with an increasing multiplier on a segment wheel, you can buy them, or if you have collected 2,000 tokens then you get them automatically anyway. The winning segment on the gamble is sized according to how may token of the 2,000 you've collected. There is big potential on the Super Spins, not so much on the standard ones.

Reel Rush 2 slot is far better than the original but it could hardly fail to be. It looks and sounds stupid as before but here we do have some potential in the Super Spins and an imaginative circumvention of the UKGC bonus buy ban by allowing you to buy tokens and play the feature! The basic free games are easy to trigger, the base game is just micro-win heavy so that's a good job. Sorry, but even with all the bells and whistles added, I won't be in a rush to see these reels ever again...