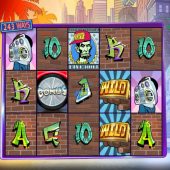 East Coast vs West Coast slot by NoLimit City follows hot on the heels of another very volatile game, San Quentin xWays slot. Here the theme is the palms of California against the urban grime of New York City with both scenes forming the background as we hear gentle beat music and see yoof-like symbols on the reels. It's like Play'n Go's Blinged slot meets Netent's Hotline 2 slot for a good old fight and no doubt that's we will get, knowing NoLimit City. So will it be a case of out bankroll going south here or can it go coast to coast?

There are 5 reels of 3 rows and 243-ways to win initially on East Coast vs West Coast slot. Symbols are single except the stacked Wild which appears on reels 2-5. The 5-of-a-kind pays are bespoke $100 bill 7.5x, $5 3.75x, $1 3x, Dog 2.5x, Radio 2x with five card values of either 1.75 or 1.5x for each full way. You can get modifiers in the base game via 2 scatters which are in the form of Car Wheels and award a Drive By re-spin, although these are normally reserved for the free games.

There are five possible modifiers of which you will see just one of for a Drive By re-spin and several in the bonus.
xWays - transforms a symbol on the reel into another one except the Wild, adding 2 or 3 more to increase the reel height and thus ways in view.
xNudge Wilds - 3-row stacked Wild which will always nudge fully into view, each nudge adding 1x multiplier to the Wild. If more than one reel (in free spins only) the multipliers are additive.
Multipliers - symbols will be multiplied and create more ways to win and more than one will be multiplicative for big potential.
Linked Reels - two or more reels clone together and display the same symbols.
Infectious xWays - the revealed xWays symbol will infect all others on the reels to increase the ways in view.

You need 3 scatters for 8 spins, 4 for 10 and all 5 for 12. If you get all 5, you get Coast to Coast spins which have the combined features of both East Coast and West Coast spins and modifiers can appear on all 5 reels. Otherwise you choose from the two options yourself. Your modifiers described above will only be possible on the last 3 reels for 3-scatter triggers and the last 4 reels for 4-scatter triggers.
East Coast Spins - a guaranteed Infectious xWays symbol appear every spin.
West Coast Spins - each spin lands one of the modifiers from above except Infectious xWays.
In both cases, seeing a scatter will add +2 spins and remove the barrier to reel 2 to allow modifiers to land on it as well as the last 3 reels. You can then land another scatter to add +2 spins and now you're into the premium Coast to Coast spins with all modifiers possible on all 5 reels!
You can buy the basic feature for 80x bet in some jurisdictions which will drop either 3 or 4 scatters in for 8 or 10 spins in the mode of your choice, or the full Coast to Coast feature for 420x bet. It's a volatile feature with big potential and the reels at best can become 84,375-ways.

Once again NoLimit City show their unique graphics and artwork capabilities here with their own quirky mechanic too. Cynics can argue that the idea is a take on Netent's Egg-o-Matic game but this is a class above. You don't see too many exciting spins in the base game without the Drive By spin landing but the feature is very good, especially if upgrading whilst you're watching it. The RTP is 96.04% but 96.20 or 96.89% if buying the features respectively. Unrivalled animations complete this game and although I reckon most players will judge it against their artistically brilliant Punk Rocker slot, it has many reasons to give it a try. I say get on that Greyhound bus and take a trip in whichever direction you fancy...