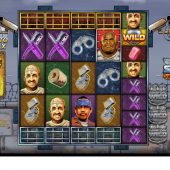 San Quentin xWays slot by Nolimitcity is as gritty as the name suggests. It's unique in that it's a prison-themed game from a new Swedish developer making few games, but huge hits. These include Punk Rocker slot which has to be a future classic, Book of Shadows, Tombstone and Deadwood. There is sinister music, a background of barbed wire and the watchtowers that surround this Supermax prison and some scary characters on the reels. Very few slots are as realistic as this; I can think of very few aside from iSoftBet's Paranormal Activity game, Gamesys' Twins of Evil slot and possibly Microgaming's classic Immortal Romance slot. So will there be no escape for our bankroll here or can we breakout with a profit from behind these walls?

We have 5 reels of 3 rows each and 243-ways to win initially on San Quentin slot although there are cells above and beneath each reel which can lead to expansion and other modifiers if the bonus symbol lands on them. For now, we need to get to grips with this ultra-high variance game's pays. These are the characters Ace 5x bet, King 4x, Mexican 3.5x, Ginger 3x, Lucky 2.5x, and objects are Soap or Zippo 2x, Shiv or Handcuffs or Toilet Roll 1.5x (told you it was gritty and realistic!) Symbols can appear stacked and single with normal Wilds and split Wilds which will split the other two symbols on the reel apart from themselves.

Landing a bonus symbol or two will open the cells above and below that reel and the bonus symbol will then also turn Wild. You will get either a top-paying character symbol, a Wild, a Razor Split symbol which will split every symbol on the reel into two (or four if it lands both in the cell above and below that reel) or an xWays symbol which produces a symbol randomly and stacked 4-high.

Maybe an unfortunate term in today's pandemic but these can be very lucrative. You need 3, 4 or 5 bonus symbols to get them. Once triggered, the reels with them one will turn grey and spin and yield either Inmate or Object mystery symbols. The number of inmate mystery symbols landed will add that multiplier to a random inmate character symbol or the Wild. If the Wild, it becomes your assured Jumping Wild for the round will start with that multiplier.
Your free spin quantity is decided by a reel spin in each cell above and below the triggering reels. Each will reveal 1, 2 or 3 spins thus the range for 3, 4 or 5-scatters is 6-18, 8-24 and 10-30 respectively and there are no extra spins or retriggers.
Here is a more detailed explanation of the Lockdown Spins modifiers:
Jumping Wilds - move to a random position each spin. If it lands on a reel with the Razor Split enhancer it will double its multiplier each time, capped at 512x.
If you trigger with 4 or 5 scatters, you get 2 and 3 Jumping Wilds respectively and the Inmate multiplier will be 4+ or 5+ times respectively. If you land a Wild in the both cells over and beneath a reel, it will turn fully Wild 8-rows high. You can achieve a maximum way spin of 32,768. So now, the prison is in flames and you're in the midst of a violent riot which has a capped maximum pay of an incredible 150,000x bet!!

As with all their recent games, Nolimitcity have created a volatile monster here in all senses of the word! San Quentin slot is simply breathtaking and will surely be a streaming hit on YouTube with the 96.03% RTP and incredible sounds, graphics and especially animations. You will find it a hard slog in the base game if you don't see an occasional beneficial modifier from the single or double bonus symbol hits. You need the feature to have a chance of one of the outrageous stake multipliers possible here. To get that going big, you will in turn need to hit early high multipliers on the Wilds which is easier with 4 or 5-scatter triggers. There is a bonus-buy available in some markets and it's an incredible 400x bet to buy the 4-scatter trigger and 2,000x bet for the 5! Otherwise it's 100x and that gives you an indication of the average feature pays for those quantities. San Quentin is one place you really don't want to drop your money in the shower...