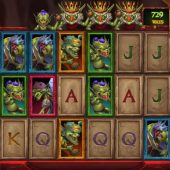 Evil Goblins xBomb slot by NoLimit City seems to have toned down the controversial and gritty games they have made of late, especially Mental slot. We still retain the classic NoLimit City xBomb mechanic used on Fire in the Hole xBomb and prior to this release, it was also added to Das xBoot slot. Here we have a more humorous Goblins theme with their torchlit cave as the background, daft music and sound effects with the little critters hanging over the reels. So can we stop them goblin up our bankroll (that was brilliant if I say so myself!) or will this be a truly evil slot to play?

On the reels...
Evil Goblins xBomb slot has 6 reels and 3 rows with 729 ways to win initially, but nothing is that simple with NLC games. You pay 20 coins to play and symbols can appear stacked and singly with winning tiles replaced via tumbles. Skull Wilds can appear on reels 2-6 and there are also dead skull Resurrection Wilds which do nothing until 3 are in view on one spin at which point they pay 11x multipliers to any win they are in, or 33x if 4 are in view and 55x if 5 are present!
There are 5 Goblin characters which pay 3x for 6-of-a-kind down to 1x and five card values paying 0.9 down to 0.4x for any full way of six. You will also notice 4 random Goblins above the reels each spin. If their corresponding Goblin lands under them in their column, they will destroy themselves in the Goblin Sacrifice feature with a grenade and turn into extra Wilds. If you destroy all 4 in one spin you get the Evil 4 feature which we'll get to soon. The final symbol aside from the scatter which appears on the middle 4 reels is the xBomb tile which will explode all touching symbols aside from Wilds and scatters, increase the rows in play (they can get to a maximum of 7 each so 117,649 ways are possible here) and each one adds 1x to your current spin multiplier.

Features
There are several here on Evil Goblins xBomb slot:
Evil 4 - when all 4 initial Goblins on any spin have sacrificed themselves the Goblin sits on a throne over reel 1, where a multiplier of 4x or higher is given. The symbols on that reel are then counted as 4+ when involved in any win. You get the multiplier above x4 when any further matching Goblins appear above.
Fresh Meat Spins - land 3 or 4 scatters to trigger this with 8 or 9 spins respectively. During the feature, each scatter landing adds +1 free spin. You will see Dead Wilds on each spin and an increased chance of triggering the Goblin Sacrifice and xBomb features. Trigger the Evil 4 during them you will upgrade to the Goblin Feast Spins.
Goblins Meat Spins - this is triggered by simultaneously landing 3 or 4 scatters and the Evil 4 feature. If you do it during Fresh Meat Spins and have 5+ remaining, the initial multiplier corresponds to the number of free spins left. You get 4 spins with the Evil 4 multiplier active and further activated matching Goblins above the reels add 1x to the in-play multiplier which never decreases from now on and your free spins remaining reset to 4, you can do this a maximum of 4 times so 20 free spins are possible. The Goblins that match on the reel underneath still transform to Wilds as in the base game.
Explosive Goblins Meat Spins - this is same as above but at least one xBomb symbol appears each spin so reels will expand and add a multiplier at least once.
Bonus Buys - if your jurisdiction allows, there is a selection available:
60x Bet - Fresh Meat Spins
150x Bet - Explosive Fresh Meat Spins
300x Bet - Goblin Feast Spins
666x Bet - Explosive Goblin Feast Spins
181x Bet - Lucky Draw picks one of the above
32x Bet - Three spins with at least 2 xBomb symbols

Our View...
Evil Goblins xBomb slot has a 96.14% RTP and is better in the base game than most NLC games. It takes 191 spins on average to trigger a bonus with a capped maximum pay of 31,969x bet which gives you the 'All Hail the King!' special animation on average every 55 million spins! The sounds, humour and animations are good here and don't get tiring although the music is a bit droll sometimes. You also get a 100x plus win on average every 700 or so, including features so the stats here are less volatile than other games in this series although they still rate it 10/10 in variance. The bonus is very lumpy and can pay poorly in order to fund the rarer huge wins it's capable of via the two top features mainly. As these offer the xBombs and Resurrection Wilds along with the reel 1 Goblin multiplier, on the expanded ways some giant hits could occur. I think these Goblins won't be as evil as one might expect, but they still have sharp teeth...