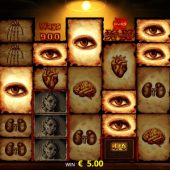 Mental Slot by NoLimit City has a hard-hitting theme centred around a grim asylum and hard is indeed the word here, as that's exactly what it is rather than the tragi-comic way NLC dealt with San Quentin xWays slot. It's possibly the most scary game I've seen since iSoftBet's creepy Paranormal Activity slot which really immersed you in its disturbing visuals and sounds. You have a grim haunting music with the game set over a dark wet room in the asylum with flickering lights while the symbols consist of patients and body parts. If you could picture a place where the infamous Nazi Dr. Mengele would have worked his horrific treatments and experiments, then this is it! Escape from this place is a no-hope for the poor residents incarcerated within, but can we get our bankroll out in one piece?

On the reels...
This Mental slot combines all the trademark NLC characteristics in one, so we see xWays, xNudge and xSplit all featured at times These terms you may be familiar with when they were allocated to previous titles such as Bushido Ways xNudge and another creepy game, xWays Hoarder xSplit slot. You begin with the reels in a 3-2-3-2-3 pattern with 108 ways but on each spin 1 to 13 reel positions will become Fire Frames and the symbol landing will split into 2, therefore increasing those ways to win.
Your 5-of-a-kind pays are what's required now and these are 5x bet Patient 1, 3.75x P2, 2.5x P3, 2x P4, 1.5x P5 and the low-pays are the Organ symbols of Eye, Brain, Heart, Kidneys and Skeletal Hand offering 1.25 down to 1x for any 5OAKs.

Special Symbols
Before we get to the various modifiers, we have Scorpion scatters which appear on 1,3,5 and while Wilds can land singly, they are mostly created by xNudges or xSplits which we will soon take a look at. There is one final rather understated darkened symbol which could have long lasting effects on your balance - in memorial of the lost souls that came before and never made it out alive, Dead Patient Gravestones can appear. Get 2 in one spin and one of the Patients from 1-5 as described above will be revealed and a random multiplier of 5, 10 up to 1000 and even 9,999x will be applied to its value. So for example if the top 5x Patient 1 is revealed, you get a 10x multiplier then 50x is paid for that symbol each time it appears on the reel it highlights on. There will usually only be one in view on the reel, but if it's split you could get two and in the above example get 100x paid!

Modifiers
As usual NoLimit City give us plenty to keep the base game interesting!
Enhancer Cells - these sit below the two short reels 2+4 and get activated by 4 and 6 Fire Frames respectively. Get 4 appear and 2 will open, get 6 and both will. You be granted either a Patient symbol or Dead Patient symbol in their position.
xWays - when appearing this symbol reveals 3 of the same standard pay kind therefore expanding the reel height, multiple xWays all reveal the same one.
xSplit - splits one random symbol on each reel before splitting itself into 2 Wilds.
xNudge Wild - always nudges to full visibility on the reel. You want it to land at the top or bottom as each step it needs to nudge to fill the reel adds 1x to its multiplier, if more than one the values are added.
Mental Transform - the Spider landing on reel 2 or 4 triggers this modifier. It will transform into either xWays, xSplit, Dead Patient, Wild or a Patient symbol. And we have yet more!

Bonus Rounds
We have 3 levels to the free spins bonus here on Mental slot. In most jurisdictions that aren't totally anal you can buy these for 80, 200 and 1000x bet respectively.
Autopsy Spins - 3 Scorpions trigger 8 of these, +1 spin if any one of them lands in a Fire Frame. Your enhancement is up to 5 positions are given a Fire Frame each spin, these are sticky and carry over. Landing a single Spider will add +1 and upgrade the remaining spins to:
Lobotomy Spins - 3 Scorpions and 1 Spider triggers 9 of these if not from an Autopsy upgrade, with +1 for any triggering symbol landing in a Fire Frame. The Spider will be sticky which means you trigger the Mental Transform (described above) every game. You now get a Dead Multiplier in play whereby each Patient symbol collects its number of appearances plus the multipliers applied to it. So say you have Patient 2 with a count of 4 and x10 then the first 4 occurrences of it get a 10x multiplier then it runs out.
Mental Spins - these are what you want for the huge prizes! You get 10 spins for 3 Scorpion and 2 Spiders in the trigger. You could land 2 Spiders in Autopsy or 1 in Lobotomy to upgrade to these. Now both those Spiders are sticky to trigger the Mental Transform meaning lots more chances of xNudges Wilds, xWays, Wilds, Dead Patients and Patients each go. Your Dead Multiplier for the Patients described above doesn't now reset after being applied to any Patient symbol, but only increases after each Dead Patient symbol lands.
This is Mental! - As with previous NLC games, if you hit the top limit of pay out, in this case 66,666x stake, you are treated to a special scene and animation!

Our View...
Mental slot is further proof if it were ever needed that the creativity and dominance of Big Time Gaming as the leading 'new age' developer is over. By that I mean smaller studios that were not corporate like WMS, IGT and MG or Netent and came to prominence in the last 5 years or so. Push Gaming were possibly the leader in this category until NLC appeared on the scene. Their graphics, themes, animations and soundtracks are simply unrivalled in latter-day slots development. With Punk Rocker slot, players became aware of the standards NoLimit City have set and have maintained ever since.
Mental slot is superb both in the base game and of course according to their USP, the highly volatile features with potentially huge rewards. You only have to listen to the distressed shrieks and wails of the dispossessed and incarcerated within these grim walls to be totally submerged into what's going on, or what shouldn't be going on in this hell hole! This is one slot I could describe for pages, so I can only recommend you try the demo to save me those words and get a feel for what I'm describing here - it's simply stunning, scary and sensational all at once. Now we come to the paradox; you could end up mental sticking around here too long but you'd be equally mental if you didn't try this slot...