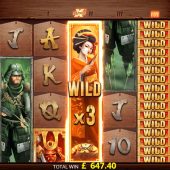 Bushido Ways xNudge slot by NoLimit City is no doubt going to have huge potential, exciting features and be another example of the rapidly increasing stock this developer holds among players. Take their preceding games, namely East Coast vs West Coast slot or the more volatile Fire in the Hole xBomb slot then add into the equation the crazy 150,000x stake limit of the infamous San Quentin xWays slot and you get the general idea. Here we have a battle background of these famous Japanese warriors, thematic music from the area and bamboo reels to complete the scene. So can we battle these swordsmen successfully or will our bankroll be slashed mercilessly?

You get 1024-ways to win here on Bushido Ways xNudge slot with symbols single and stacked. The pays aren't huge for the 5-of-a-kind wins but there's a reason for this which we'll soon discover. The Red Bushido Warrior pays 2x bet, Blue 1.5x, Green 1x and five card values are present from 0.75 down to 0.5x for each full way. You get single Wilds on reels 2 to 5 and a Geisha stacked Wild on reel 3 which will always nudge up or down to fill the reel, awarding a multiplier of 1x each nudge, so it will be 2,3 or 4x. The final modifier is that when landing any fully-stacked Warriors, any bonus symbols in view will transform to the best-paying symbol in view as well as any lower-value stacked Warriors.

You have two levels here, which in some regions can be bought for 75 and 700x bet respectively. This is where the xNudge comes in to play too. xNudge Mechanic - In each free spins level, you have 1,2,3,4 marked above reels 2,3,4,5. Any Wild landing will firstly fill any spaces below it on the reel into Wilds, then each of these will split according to the number above the reel. So a Wild landing at the top of reel 2 for example fills the reel with 4 Wilds. On reel 3 it would do the same, but then they split into 2 Wilds so you have 8 on the reel, with 12 and 16 the maximum on reels 4 and 5 respectively.
Shogun Spins - The scatters appear on all reels but the middle one and you need 3 for 8 spins or 4 for 9 spins. Your enhancement is that one Wild at least is guaranteed to land on reels 2 to 5 each spin. No retriggers or extra spins here. You can land the Wild Geisha on reel 3 too for an upgrade to
Geisha Spins - This time your 8 or 9 spins must be triggered with the Geisha Wild landing on reel 3 at the same time. You get an additional spin for each nudge she needs to fill the reel and 1x extra multiplier applied to the round as well. The Geisha sticks in position throughout and you are guaranteed again a Wild to land on at least one of reels 2,4,5.
If you achieve the limit of 30,000x bet in winnings, you are treated to a Journey's End video animation. Don't expect this to happen without starting with the full 4x sticky Geisha Wild in that free spins round and hitting the maximum ways via the split Wilds (landing them on 2,4 and 5) in a spin, which is maximum 12,288 ways!

Once again with Bushido Ways xNudge slot Nolimit City have made an imaginative game which doesn't necessarily need a bonus buy to get good fun and base game performance. Graphically and regarding sounds and animations it's not quite the level of preceding games but it's not too hard to hit the basic bonus round and this can pay well. The RTP is either 96.01%, 96.13% or 96.82% which is via no bonus buys or consistently using one of the two bonus buy options. The features are exciting as they always are with this developer and you always have the thought of one of those huge hits at the back of your mind when triggering them. This is one slasher game you shouldn't be too afraid to visit...