Fire in the Hole xBomb slot 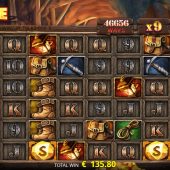 Fire in the Hole xBomb slot by NoLimit City we can expect to be volatile with huge big-win potential, given their other releases. If we take San Quentin xWays slot for example with its 150,000x bet pay limit and latterly East Coast vs West Coast slot, then you will have the general idea. At first glance this game seems to be based on Relax Gaming's excellent Money Train 2 slot, except our train is a mine cart and indeed a gold mine forms the background, along with doom-laden music and heavy sounds. So can we avoid our bankroll ending up in the hole here or will we get some fiery gains to leave this underground chamber with?

We start on Fire in the Hole xBomb slot with 6 columns of 3 rows each and 729-ways to win, with tiles dropping in independently therefore can appear single or stacked. Wins pay left-to-right for 3-of-a-kind or more and when getting 3 to 5 similar tiles in a horizontal row anywhere in view, you trigger Wild Mining which means the centre position(s) will become xBomb Wilds for the next tumble, increasing the multiplier by 1x for any further Wild wins and so-on.
Wilds can also drop in anyway and in either case will explode and allow replacement tiles to give another chance. Successive wins will also expand the reel rows once per tumble to a maximum of 6 so as you can see in the image, up to 46656-ways are possible!
The 6-of-a-kind pays are lantern 7.5x bet, Bag 3.75x, Boots 2.5x, Rope 2x, Pickaxe 1.75x with five card values of 1.5 down to 1x. You need to collect 3 or more Gold Nugget scatter to trigger the main event, the Lucky Wagon Spins.

Right, these are quite like the Money Train 2 slot bonus. With 3, 4 or 5 scatters respectively you will begin with 2, 3 or 4 rows of your 6 reels open. So 12, 18 or 24 individually spinning reels which can only display blanks or Coins. You get 3 chances to land a coin anywhere in view and each time you do, the spins reset to 3 and the coin value of the train cart above that reel becomes stuck where any coin landed. Across the top there is a train which changes carts each spin and the 6 carts can contain the following enhancers:
Coin Values - of 1x in the form of turds or gold carts of 10 to 100x bet.
Multiplier - multiplies by 2 to 25x the coin value(s) on that column.
Dynamite - this will be 2,3,4 or 5 sticks. This will firstly add the dynamite count as a times-bet addition to the coin, secondly blow up some blocked positions to increase the size of your grid, then activates a chest locked away at the bottom of the grid and lastly would add its value to any coins in the relevant column.
Bag - collects all coin values on the column and adds them to the triggering coin.
Chest - collects all values in the entire grid and adds them to the triggering coin, then frees up those positions, except the Dwarf if you are lucky enough to have it.
Dwarf - Collects all values in view and adds them to the triggering coin position. Then he stays in place and does this for every subsequent spin, rather like Money Train 2's 'Persistent Collector' tile. Get this after any chests and you should be in for a big total, which when it reaches an incredible maximum of 60,000x bet will turn the game to Beer Time and end the spins!

Fire in the Hole xBomb slot has bonus buys for 3,4 or 5-scatter triggers respectively at 60, 157 and 500x bet cost in some jurisdictions. The RTP is 96.06% played the UK way or 'normally' and 96.07, 96.20 and 96.96% for persistent use of those 3 bonus buys. As for the slot itself, NoLimit City are now where Big Time Gaming were - a developer producing few but really popular and big games but with far superior themes, graphics and animations to accompany the huge potential. Here the theme and sounds are well executed and the base game can pay really well itself, before you even trigger the volatile feature. The feature is hit and miss, you'll be fortunate to get a very good one but you'll know it when you see it and the excitement is unrivalled when it arrives so bring on the Dwarf! This is one hole you may be glad you threw your money in...