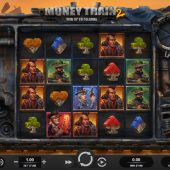 Money Train 2 slot by Relax Gaming arrives on the back of their hugely successful Money Train slot of 2018. This had the big-win chasers in raptures by producing wins of 7-9,000x bet in numerous YT videos. We get a Wild West theme but less juvenile than say Netent's Wild Wild West, good game that it is. Play'n Go's Gunslinger slot or the far superior Wild Rails slot will give you an idea of the graphics and characters. We hear a slow western musical soundtrack as we open the game and a rusty old locomotive as the backdrop to the reels which of course itself lies in a wind-blown desert town. So can this be the fast train to a profit or a money drain for our bankroll?

We begin with 40 fixed pay lines on a grid of 5 reels of 4 rows each and symbols can appear stacked on Money Train 2 slot. There are two types, character and card suits and the 5-of-a-kind pays are Skull Wild or Red Character 20x bet, Orange Character 10x, Green 9x, Blue 8x with four card suits of 4 down to 3x for 5 in a line. Bonus tiles can appear on any reel and give you a minor modifier if you get only 2 in view. They each reveal a multiplier which is added together and the reels respin until a win occurs. Each re-spin where no win occurs raises that multiplier by 1x. the free games is really where the huge potential here is at though!

You get these when 3 or more bonus scatters land in view. Your scatters will turn into times-stake values and remain in place, along with any ones that turn into a Persistent Symbol but we'll come to those shortly. You get 1-10x for any standard Silver Symbol and 20-200x for any Gold Symbols, then 3 re-spins which reset each time a further symbol lands on the grid. Remember, all symbols remain in place and only blank tiles will re-spin and your running total times-stake is displayed to the right of the grid. You can expand the grid by 1 column for every reel you fill with 4 symbols during these re-spins, maximum twice. This means you can end up re-spinning on a 7x4 grid at best. This bonus may sound pretty mundane, but wait to hear what the Modifier or especially the Persistent Modifier symbols can do!

Money Train 2 slot has huge potential, in fact it's capped at 50,000x bet. Your RTP is 96.40% or 98.00% if you choose to buy the main feature for 100x stake if allowed in your jurisdiction. The base game doesn't tend to pay a lot because much of that RTP is tied up in the hugely volatile bonus round which is incredibly exciting and correspondingly hard to trigger. The graphics are decent enough, the soundtrack very good and the animations excellent here, but you'll soon overlook that when the feature arrives which can take quite a while and a big bankroll so be warned. This game, I reiterate, is all about the bonus. Get a good one and you could well need a train yourself to transport all that gold back home...