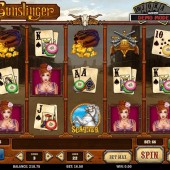 If ever a theme lent itself perfectly to online slots, it's the Wild West. Gamblin', shootin' and gold-diggin' - and that's just the casinos you play them in.

Jokes aside, the Wild West theme is always popular with slots developers, particularly when they're adapting land-based games from their Vegas counterparts into something you can play on your computer at home. Betsoft Gaming's 3D gold-digging slot, Black Gold, already tackled the theme with great effect, and the film adaptation slot of The Good, the Bad and the Ugly was great for fans of Spaghetti Westerns.

Developer Play n Go's stab at the wild frontier is Gunslinger, a 5 reel, 25 pay-line slot that sees you in the dusty leather breeches of a nasty-looking cowboy bent on some prospecting - and gunning down a bad guy or three. As well as the gun-toting shooter, we get bags of gold and buxom barmaids on the reels, along with the sheriff's badge and 10-through-ace symbols that actually look like poker hands. For once, it's good to see a slot making poker symbols look like they're in a poker game! In fact, make a winning poker hand with those cards - the hand gradually fills up at the top of the screen - and you'll trigger a bonus Collect feature where instant cash or the game's progressive jackpot can be won. Simply turn over the sheriff's badges in the bonus game to reveal your prize.

The gunslinger of the title acts as the game's Wild, and substitutes for all symbols other than the Scattered white steed. Five gunslingers across the reels wins you a tasty 10,000 coin jackpot, so look out for him. Three Wanted poster symbols, meanwhile, triggers the Bounty Bonus Game. Here you get to shoot a series of barrels to reveal cash prizes. As you proceed through the dusty town you'll end up face to face with the bandit. Take him down with some fine shooting and you'll receive another bonus. Finally, three brown bottle symbols activates free spins.

If you're a fan of Sergio Leone westerns, poker, slots with varied bonuses and progressive jackpots, or like me, all of the above, you'll love Gunslinger. It's near the top of my favorites list at the moment and I can't see it being replaced anytime soon.