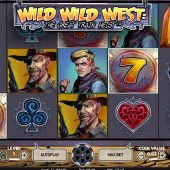 There aren't many railway themed slots games about, so Wild Wild West from Netent is unique in that respect ahem...

There are a few rough looking characters on Wild Wild West whose aim is to either rob the train or the contents of safes. Inevitably the game has the cliche western-style music in the background with various effects for wins composed of the characters such as ricocheting bullets and yee-hahs.

All aboard the reels

Netent's Wild Wild West has 10 paylines over 5 reels with 3 rows. The symbols are all singles as are the Wilds which appear on all reels but do not multiply. Aside from the dodgy-looking characters you have the usual 9, 10, J etc. for the lower pays. The highest pay is 50x stake for either 5-of-a-kind (5OAK) wilds or 5OAK cowboy. Despite only 10 paylines the game is quite low in volatility with frequent wins and a return to player of 96.87%.

The features and what they deliver

Wild Wild West has 2 features of which we will visit the simplest first. 3 gold safes on reels 1, 3 and 5 trigger a plain 'pick-me' round whereby the safe chosen will yield a win of 5-50x stake. In the past there have been games that have these low-return bonus rounds triggered 1, 3 and 5 that repetitively drop the first 2 symbols on reels 1 and 3 with alarming regularity thus starting the annoying 'heart-stopper' slow spin on reel 5 - fortunately Wild Wild West doesn't have this irritating trait. Therefore a huge relief!

The lucky 7's appear on all reels and 3, 4 or 5 of them scattered will trigger 10, 20 or 30 free spins respectively, which can be retriggered. Now I mentioned the plain single wild above, but when the free games are won you have a locomotive wheel with 4 segments. You want this to stop on the left half as the two quarters there have a wild enhancement of expanding or spreading. If you stop on expanding, any wilds will expand to fill the whole reel Spreading Wilds will simply add one or two extra Wilds in any direction to the Wild which landed. The right half of the wheel contains the other 2 quarters, one of which is just the standard Wild and the other being the standard Wild but with a 2x multiplier.

There is also a guaranteed Wild on every single spin in this feature! You will see a vertical and horizontal pair of rails across each other and moving - when they stop, the square where they cross will correspond to a position on the screen and it will become Wild and then the other reels stop. This doesn't guarantee a win but it makes one far more likely. Expanding Wilds are the most beneficial and seem to come up most frequently on the wheel.

Wild Wild West is not a classic by any means and even with a full screen of Wilds in the free games will only award 500x stake. The bonus rounds however are quite frequent and the win frequency good which means the game maintains your attention. Netent haven't hit the buffers with this slot, but have not hit full steam either. For a different kind of stick-up game, try Netent's Heist slot - similar theme, but totally different setting.