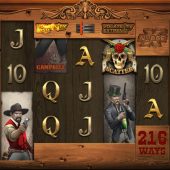 El Paso Gunfight xNudge slot is Nolimit City's latest addition to their volatility extreme range. We have seen the colossal potential of San Quentin Xways slot of 150,000x bet already hit plus wins exceeding 20,000x on both Fire in the Hole xBomb slot and the one prior to this, Bushido Ways xNudge. Here we have the classic western theme with wooden reels, a saloon bar shelf as the background and of course various classic musical strings and sound effects to complete the scene. So can our bankroll be quick on the draw here or will it be our last gunfight ever?

You start with 216-ways on El Paso Gunfight xNudge slot with the reels initially in a 4-3-3-3-2 Stance for less volatility or you can choose 2-3-3-3-4 Stance for higher volatility. Symbols appear stacked and the 5-of-a-kinds aren't huge with 3-row high stacked characters the best. These are Campbell at 6x bet, Krempkau 3.2x, Hale 2.4x and Bystander 2x with five card values from 1 down to 0.8x. You have Stoudenmire stacked Wilds on the centre 3 reels which will always nudge in fully and raise your spin multiplier 1x each nudge used and add to each other if more than one. You have the Deputy Badge scatter on reel 1 and Marshall Badge on reel 5, but these swap reels if you choose the higher volatility game.

Deputy Badge appearing will convert all low-pay symbols to the same one, including the Badge itself.
Marshall Badge appearing does the same but with the character symbols.
Both Badges will do both of the above actions and expand the reels to 4-3-3-3-4 and 432-ways and the Badges become Wilds.
4 Dead in 5 Seconds occurs when Campbell, Krempkau, Hale and Bystander all land in the same spin along with the Stoudermire Wild. The Wild remains in place, expands to a 3x3 i.e. 27-way Wild to fill the middle reels and triggers a re-spin with its multiplier held which will be 1, 2 or 3x depending on nudges needed when it lands. You can buy this for 300x bet in some jurisdictions.

You need 3 Skull scatters to trigger 8 Gunfight spins and you can choose your Stance before you start for higher or lower volatility. Your 3 scatters now become sticky moving Wilds for the duration and Marshall or Deputy appearing add +1 spin. If Stoudermire Wild lands on a reel with a moving Wild, its multiplier doubles for each Wild it covers. You can upgrade this round if you land either one or both scatters on reels 1 and 5 during it, to any of the next three.
Deputy or Marshall Gunfight spins are triggered the same as above but you will get one of the scatters on reel 1 or 5 too when triggering. You get 9 spins and can choose the Stance again and your scatter will remain in place to convert itself and all card values to the same each spin. In the case of the Marshall Gunfight it's exactly the same bar the fact the scatter remains to transform all character symbols to the same one.
As you might have guessed, the final possibility is the Drunken Gunfighter bonus where you trigger with 3 scatters and both the Marshall and Deputy. You get 10 spins but won't get the card and character values converted to the same symbol. Instead, the Deputy and Marshall symbols become moving Wilds so you have 5 in play every spin. No extra spins here but where the big prizes can land if you're lucky, by getting all 3 Stoudermire Wilds at once.
You can buy the 4 free spin features above for 80, 400, 400 and 800x bet respectively in some jurisdictions and your win is capped at 44,440x stake.

El Paso Gunfight xNudge slot has a RTP of 96.06 - 96.79% which is ranging from the base game alone to solely buying the highest feature. You have superb graphics and animations with a very good soundtrack, but overall it's a rehash of previous games and doesn't really bring anything new to the player. Like Big Time Gaming, the output from this developer will clearly be in future the same trademarked ideas mixed and matched with different themes. I am not sure either about a soundtrack which includes the word 'cocksucker' but I suppose gambling is an 18+ occupation for most. The basic feature isn't hard to trigger and won't pay that much either without a quick upgrade, so again we have a game clearly aimed at streamers using feature buys to get the Hollywood hits here. The free games aren't bad to watch but you're always aware of how limited you are in potential with no 4-scatter or better trigger. Sorry, but this gunfight can stay in El Paso, permanently...